I have reached my Camino goal for 2015. I have arrived to Santander.

On Sunday morning, after a restless night’s sleep in the famed Albergue of Güemes (entry to come soon. Stay tuned!), I had a quick breakfast and was out the door. I was wanting to walk alone as I needed solitude to process some emotions I was going through, and so I was one of the first to leave. However, as I was having some problems with my calf muscles due to the post AnkleGate (my 2014 sprain ankle), I had to take it slow and many amazing pilgrims I met in Güemes passed me. I let them, saying “¡hola!” with a smile.

I loved the mist being evaporated by the rising sun.

I passed some literally empty houses. I wish I knew the story behind them.

I was hoping to have a second breakfast, my tostada con tomate that Euskadi seems to run from, but everything in Galizano was still closed at 9 in the morning. 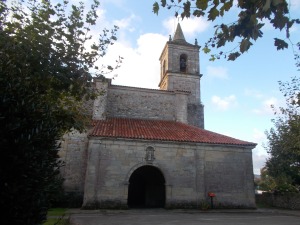 I began to limp my way to the beach, and I realised I had forgotten to take my selfie of the day. I took out the camera to snap myself with the mountains, mist and still rising sun in the background. While doing this, I dropped my camera. 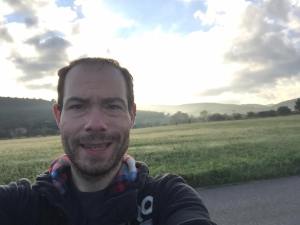 The things we do for a selfie. Adéu, camera.

So far on this weekend on the Camino, I lost my mobile and broke my camera. Good going. 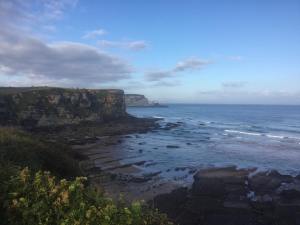 At least I have my trusty iPad Cesc, who snaps photos for me when my camera is tired. The camera lasted its average 15 months, and I’m sure I’ll have a new one coming at Christmas. Cesc was busy as the Camino arrived to the coast (of course I took the coastal way). I ran into some surfers, and the fields had been harvested. One photo I snapped was the contrast of the fields (which remind me of Ohio), the Camino, and the cliffs leading to some beautiful beaches.

Around one corner, Santander appears in the distance. I had already taken the ferry from Somo to Santander last June. I stopped to take off my hoodie and apply sunscreen, admiring the Cantabrian Sea in all its glory.

Santander in the distance

A few runners came along, wishing me a “buen Camino”. The Cantabrians seem really open to pilgrims and friendlier than their Basque neighbours. Of course, I think the Basques are walking these trails themselves and don’t really differentiate between a pilgrim and a day hiker with no destination. But the Cantabrians also were taking advantage of these beautiful trails and a beautiful early autumn day. 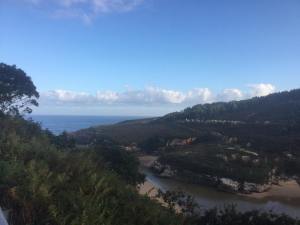 Who wouldn’t want to take advantage of this beautiful day?

I arrived to the beach, which I was hoping to avoid walking on the beach to help my muscles a bit more. No such luck. The beach was beautiful with some amazing views of Santander. 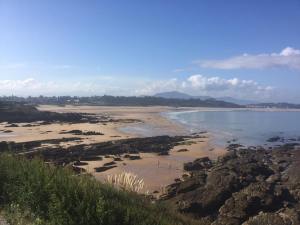 I saw fellow pilgrims from Güemes enjoying the beach. I remember thinking as some of them had passed me, “Am I doing this wrong? Am I pausing for too many photos?” I let this thought evaporate into the mist. My right calf muscles needed a slower pace, and as a writer with anxiety, I am more prone to contemplate the sea for longer periods of time.

I left the beach a bit too early, trying to remember where I had left it the year before. This lead me through a very residential section of Loredo and Somo and not the Camino. Oh well, it was a different sort of scenic route.

I took too many photos of the sunrise, so sharing more of them.

I arrived to Somo, had an expensive tostada con tomate at 11:40 (typical Spanish breakfast ends at 12) and waited for the ferry with a German pilgrim I had met on the albergue. A few more from Güemes caught the 12:25 ferry with me, and I explained what little I new about Santander (Palacio Magdalena, the story about how it was the last province capital (or one of the last ones) to take down their statue of Franco and you can feel the conservative atmosphere in the air today). It was a bit hard to say goodbye to them and wish them a buen camino. A few of them stayed in Santander, and the German one was going on to…somewhere. 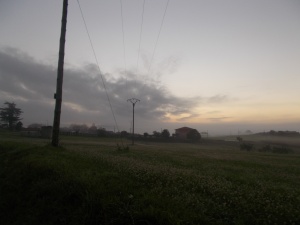 I was lucky as I arrived to the bus station at 13:10, and I bought the last bus ticket to Bilbao for the entire day. There are buses nearly every hour from Santander to Bilbao, but Sunday is a popular day for travel. I had a pintxo de tortilla at a Chinese-ran bar, and the Chinese man wished me a “buen Camino.” It’s the small things like that make me smile.

I am ready for more Camino action, and I may tackle another weekend if the good weather holds and I have money and energy for it. If not, there is always next year.