It was the best of days, it was the worst of days.

It had been a long 2.5 months since my last day on the Camino in July, and I was ready to hit the road again.  My goal for 2015 was to arrive to Santander, and thankfully, the cranky Cantabrian Sea (perhaps jealous of nearby cousin Mediterranean Sea?) decided to bless me with an opportunity before I headed back to work on Oct. 1st. 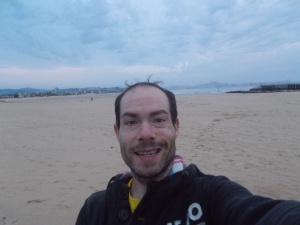 On Saturday morning, I awoke at 6 in the morning, was out the door at 6:30 to catch a taxi…who told me “I’ll be right back.” 10 minutes later, he came back, and I was a bit worried about catching the bus on time. I should know that Alsa has not once been on time at Termibus in Bilbao (they are usually pretty punctual elsewhere in the peninsula, but the Ruta del Cantábrico runs into traffic problems or something all the time). I found someone in my seat. It was still dark out, which I hadn’t realised being on holidays and not having to get up so early.

At 7:45 the bus arrived to Laredo, and I made my way to the beach. They were having a medieval festival, which I wish I had known about as I would’ve spent the night there. Everything was closed, so I couldn’t get my café con leche before hitting the road. 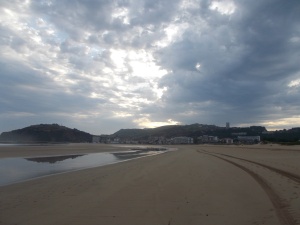 The Camino I chose (there are two that leave from Laredo) went along 4 km of beach. About 1 kilometre into it, I realised that my mobile phone was missing. I searched my backpack to no avail. I wondered if it had fallen out when I put in new batteries in my camera, so I went back to the beginning of the beach. No luck.

I tried to put it at the back of my mind and not worry. I mainly have my phone for Whatsapp (a texting app popular in Spain), Facebook and Twitter, but I have a lot of important contacts via Whatsapp. I eventually found the Zen of the Camino. I can’t change it, and I can accept that I can’t change it. Wherever my phone is, I hope it’s enjoying itself. 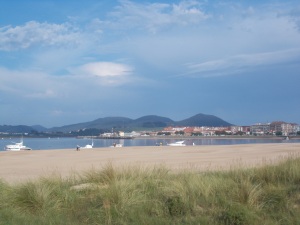 I had a café con leche at the end of the beach 4 kilometres later before catching the ferry to Santoña (2 Euros). The ferry was quick, and when I arrived to Santoña, it was instant like. 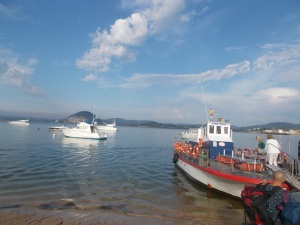 The town of 11,000 is quite nice, and I had my breakfast of tostada con tomate with a second café con leche. They gave me a shot of orange juice and a small piece of cake to go with it. 2 Euro. I love Cantabria!

I took off my hoodie and applied sunscren before continuing on my way. 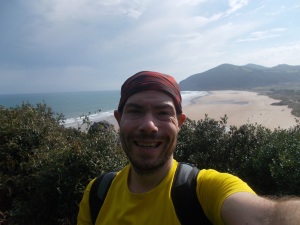 The day is warming up.

The Camino passes the wildlife reserve park…and a prison. I knew the building was quite big and strange, but when I found out it was a prison, I was kind of shocked.

The Camino passes between this…and a prison.

I arrived to another beach, and I admired it. I took the sidewalk/pavement along the road instead of doing more beach walking, and before I knew it, the Camino turned. It was hard to know where the Camino went on the beach, and two very nice strangers pointed out the way to climb Brusco (which had red sandy paths!)

The mountain wasn’t so hard, and as I was climbing I saw an arrow painted on a rock that I should’ve been able to see from the beach.

Before I knew it, I was descending from Brusco to the endless Noja beach. I have several Basque acquaintences that go to Noja often, so I was expecting a bit more. The beach was lovely, but outside of a nice Plaza Mayor and church, the town left a bit to be desired in my opinion.

The next arrow was quite a blessed sight, needless to say.

After leaving the residential areas of Noja that never end, I passed a church and a lot of fields. The fields reminded me a lot of my old home Ohio, although Ohio does not have mountains in the distance. Some cornfields had recently been harvested, and I got that feeling of autumn that I love so much. Ohio also doesn’t have the church of San Pedro in Castillo in the distance either.

Ohio with a medieval church or Cantabria? You be the judge.

I saw a lot of peregrinos, but as I like to walk in solitude, listening to the Camino and nature, I let them pass ahead. Some of them I would later meet at the albergue, but that’s a different entry. 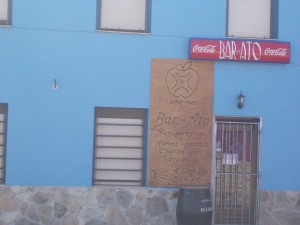 I stopped for a quick refreshing drink at the albergue in San Miguel de Meruelo, and I was so thankful to see only an hour more awaited me to the famed albergue de Güemes. I’m going to say I arrived at a bad time, as they were serving lunch to the pilgrims staying there, but I really didn’t feel welcomed there. So thankful I had planned to stay in the albergue in Güemes and was on my way after finishing a cold drink and checking wifi/emailing about my phone/uploading pictures to Instagram. (No mobile for 4G ahhh!) 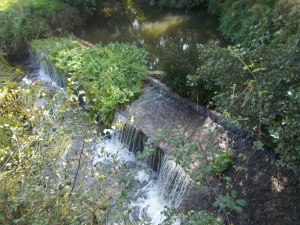 Another six kilometres later. I tried finding a Roman church that was advertised to be 400 metres away, but after 400 metres and mean barking dogs…I turned around and missed it. I did see some beautiful views and more and more cows.

I was dying to rest, but I soldiered on to Güemes. I was excited when I checked Google Maps and it gave an estimated 15 minutes. I wasn’t sure I was following the right arrows, but I had been. The Camino was going along a road, and I was ready to leave the road behind. Asphalt walking is ugh.

When I saw the turn off for the albergue 800 metres away, I was ecstastic. It had been a long 29 plus kilometres, and I was ready for a rest.

I was also nervous about staying in an albergue, even if it is one of the most famous albergues on any Camino. With that said, I’ve decided to give an entire entry (look for it next Thursday) dedicated to my experience at this albergue, as it was also my first Camino albergue. This experience has been a fantastic one.

Día del Camino: 26-septiembre-2015
Kilometres walked: Officially 29, but definitely more with the backtracking.
Book I was reading: Pues, me largo by Hape Kerkeling (a German (translated to Spanish) account of the Camino Frances.