Last week, I participated in another English village in Spain. This one, VaughanTown, happens to be part of the Vaughan English Learning Empire of Spain. From Sunday morning until Friday evening, I joined 21 other “Anglo” volunteers to help 21 españoles out with the English language by giving them an opportunity to use all that English grammar and vocabulary they have been studying ad nauseam for their entire lives but never actually use. 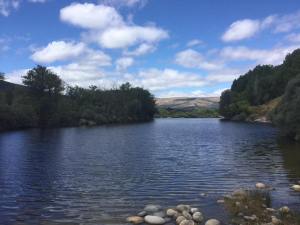 The most popular 1-to-1 Spot

The location was in the heart of the Gredos near Barco de Ávila in the province of Ávila. The hotel was amazing, and the scenery was breathtaking. We arrived about 13:00, and after a brief introduction we had some lunch and time to check in and unpack. The rule is that two Anglos (English-speakers) and two Spanish-speakers sat at every table. At the beginning of the week, it was quite difficult for the Spanish-speakers to understand (especially the Scottish accents, but I had some problems with those myself). By the end of the week, their conversation skills had improved.

After checking in and receiving more rules, we were off to our one to ones, which we spent talking to the Spanish speakers and assisting them as much as we could.  We usually walked on the many trails nearby, the most popular being to the Río Tormes (Lanzarillo de Tormes) Throughout the week, there were some group activities and three Entertainment Hours, which consisted of skits rehearsed throughout the day.

The Spanish also have to prepare a presentation in English. As a lifelong student of Spanish (and now Catalán), I understand the nerves of having to present on a topic not of your choice in a language that is not your own. It’s very difficult. I can barely do it in English myself if it’s not in the classroom.  Major props to the Spanish who participated.

One evening, there was a queimada, which is a Galician tradition to burn out the bad things in your life. Queimada is an alcoholic drink made from orujo (a Galician alcoholic beverage), sugar, lemon peel, coffee beans and cinnamon that is set on fire. It’s ready when the flames are a bright blue.

On Wednesday, we had a brief tour of the village of Barco de Ávila. On Thursday during my free time, I found another village, Los Llanos de Tormes, which had even more beautiful views of the Gredos mountains.

There was lots of wine, even more water, lots of great meals, but most importantly were the memories I now have of these 42 people from all over Spain and all over the world who had gathered here this week.

I’m not going to make a statement as of which is better, VaughanTown or Pueblo Inglés    (now Diverbo). Both are unique opportunities, and both depend on the participants. You get out of it what you put into it. Either one will give you lifelong memories and a week with some fantastic people, and there are too many variables to say which is better.

2 thoughts on “A different English village in Spain.”