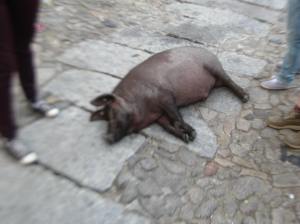 The pig of La Alberca

Three years ago, I participated in a program called Pueblo Inglés (which is now Diverbo). The program offers a chance for Spanish students of English to be immersed for a week in English without leaving Spain. The locations are in beautiful mountain villages, and “Anglo” volunteers are there to speak English and create the surroundings of an all-English environment without leaving Spain. The volunteers do it out of the kindness of their heart, for a chance to see Spain, because they’re low on cash funds, for the experience, or for any of a plethora of reasons. There are probably as many reasons as there are volunteers. Just for speaking English, you are treated to seven nights in an amazing hotel and are fed breakfast, lunch and dinner along with water and wine. Not bad just for speaking your native English, eh?

The Thursday before leaving, the Anglos are invited to a tapas lunch and a flamenco show to get to know each other a bit. On Friday morning, they meet outside the headquarters to take the bus to their location. The bus arrives around lunchtime and we start meeting the Spaniards who we will be helping with for the next week. The Spanish (or their companies they work for) pay a pretty penny to attend this, so we want to make sure they get what they pay for.

It’s a lot of talking, which can be hard for the introverts out there like me (I made sure to get away during our free time after lunch to recharge), but it works well. There are 1-to-1s, which they change up so every Spaniard talks with every Anglo at least once, 2 to 2s, which you’re given some topics to debate, and many other activities. Every evening there are some skits or performances, usually on the comical side.

On one night, there is a “queimada”, which is a Galician tradition and drink of warding off evil spirits. The drink is alcoholic in nature and creates a fire during its creation. It did not ward off the evil spirit of anxiety for me unfortunately. Another night is party night, which is later followed by a tour of the nearby village the next day.

The three-course meals are amazing, and by the end of the week, everyone is exhausted and sad to say goodbye to the new friends they’ve made.

These “English villages” are held throughout the year and throughout Spain, although the most famous location is La Alberca in Salamanca. (This is the one I did. Amazing village). They recently opened up the opportunity in Germany.

It was a week I’ll never forget, and I’m not writing a lot of details to respect privacy. I have also recently volunteered to do a week with a similar program, which you’ll be able to read about next week.

If anyone is interested in volunteering for Diverbo’s Pueblo Inglés, here is the link.

One thought on “An English village in Spain.”