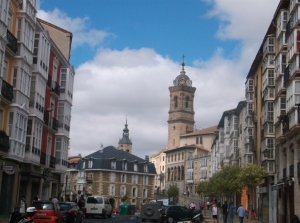 Álava was my last new Spanish province (sorry Basques for saying “Spanish”) in August 2013. I have six left, which I hope to pick up sometime in this next year. In the autumn of 2013, I spent a lot of copious free time there as I was seeing someone from there.

In the Basque Country, all the fuss is made about San Sebastián-Donostia and Bilbao, but Vitoria-Gasteiz (the Green Capital!) is worth checking out too. While one can go crazy driving around in a circle on the city streets (that bus ride killed me!), the Casco Viejo is beautiful, with the cathedral and the Plaza de la Virgen Blanca being the highlights.

I made the mistake of visiting Vitoria-Gasteiz for the first time during their fiestas, la Semana Blanca, which begin on August 4. While I am happy I did see the arrival of the Celedón to officially commence the week of parties, I did not appreciate the Basque tradition of celebrating by throwing wine at everyone. I know, I’m an aguafiestas (party pooper). It was hotter than Bilbao, but it’s usually a lot cooler in winter. It’s one of the coldest places in the Iberian Peninsula (and that offends no Basques, Spaniards or Catalans!)

The tramin Vitoria is quite similar to the one in Bilbao, and the city is very bike friendly. It was the European Green Capital of 2012 and is also the capital of the Basque Country, which is probably what inspired the people of Bilbao to rename their city “The Capital of the World (La capital del mundo/munduko hiriburua da). It has a population of 242,000, and the people are nicknamed “babazorro”, or bean eater in Basque, as Álava is known for beans and potatoes (they are probably the ones who brought potatoes to Idaho, which has a Basque connection.)

While I have been to the Bizkaia side of Gorbeia, one of the most important Basque Mountains, I haven’t been to the Álava side. One day, one day.

A few weeks ago, I decided to do some exploring and research for this entry. (I am still mad I haven’t made it to Laguardia yet.) I caught Cercanias (Spain’s system of commuter trains) and visited Llodio (which is nice) and Amurrio, which I fell in love with. Beautiful views and nice towns.

While Gipuzkoa and Bizkaia get most of the attention when it comes to the Basque Country, Álava is also quite nice and shouldn’t be left out when visiting Euskadi. 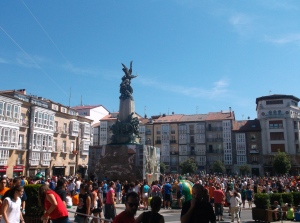 The Old Town of Vitoria is quaint and perfect for a sunny Sunday afternoon stroll. Two cathedrals, the Plaza de la Virgen Blanca, Basilica de San Prudencio, the Basque Museum of Contemporary Art, a museum of playing cards and many other churches and plazas are just waiting to be explored. 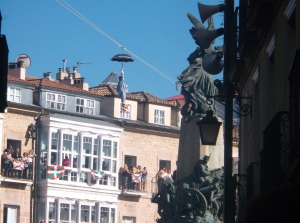 To kick off the fiestas of Semana Blanca, a figure holding on tightly to an umbrella (Vitoria-Gasteiz is the Basque Country, after all), descends to his awaiting crowd. then the “chupinazo”, spraying everyone within reach with wine, begins. Every August 4th without fail the Celedón will descend upon the Basque Capital.

Gorbeia, the 1481 meter tall (4859 feet) mountain in the center of the Basque Country, has been the heart of a natural park since 1994. It is a tradition for Basques to climb the mountain on the last day and first day of the year. I’ll stick with the autumn when the leaves are changing for more beauty. I cannot wait to arrive to the cross after my Camino is over.

Amurrio, population 10, 239 habitants as of 2014, might be small, but it is beautiful. I rather enjoyed my recent Sunday afternoon walk through the village. The town hall is worth seeing, and the town produces txakoli, the popular Basque wine.

Laguardia (to be discovered)

Laguardia, the small village of 1500 folks that I had hoped to have visited before writing the entry for Álava, is one of the most important wine-making villages of La Rioja Alavesa. The area was first habited during the pre-Roman times. Besides the bodegas, the town offers a wall, a Renaissance old town hall, a few churches and some plazas to check out. There are also some prehistoric remains in La Hoya and a Celtic Pond.

The Valderejo Natural Park is located in a valley on the Purón River and is known for its wildlife, especially the Griffon vultures. It’s located on the way to Burgos from Vitoria.

Valle Salado (to be discovered)

Near the village of Añana, population 135, 30 kilometres from Vitoria, are the salt flats of the Valle Salado (salty valley). They were abandoned in the 20th century but have been made a historical monument to attract interest and tourists. They look really cool, and I hope to visit soon.

No matter where you travel or find yourself, there is always something to be wondered about. To limit yourself to seven wonders, siete maravillas or set meravelles is next to impossible. And to see all the wonders Spain or the world has is definitely impossible. That will never stop me from trying! 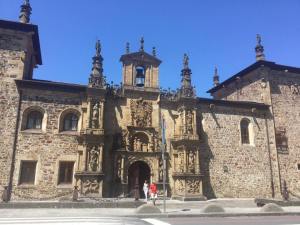 This weekend, I took a break from the Camino de Santiago to work on my Basque Bucket List. I was itching to explore a new town without having to worry about time and how much walking I could get in. Este fin de semana, he descansado del Camino de Santiago para tachar cosas de mi Bucket List de euskadi. Quería explorar un pueblo sin preocuparme de cuanto tiempo iba a tardar a caminar hasta el próximo pueblo.

Oñati was my destination. An hour and 10 minute bus ride (and 6.65€ one-way ticket) later, I arrived in Oñati. While it wasn’t as medieval as I had been led to believe, the village of 10,000 residents has a lot to see. Oñati fue mi destino. Un viaje de autobus de 1 hora y 10 minutos que cuesta 6,65€ ida) me llevó a Oñati. Mientras me esperaba algo más medieval, el pueblo de 10,000 personas tiene muchas cosas para ver.

The Universidad de Oñati is one of the oldest university buildings in the Iberian Peninsula and is home to the International Institute of Sociology of Law. There are also a few nice parks, the main plaza where I had a relaxing café con leche con hielo (iced café au lait) and some churches. I walked along the Oñati River a bit. Oñati in Euskera means “place of many hills”, and I admired the views of them. I wish I had had time to hike the 9 kilometres to the Sanctuary of Arantzazu, but alas, if I wanted to catch the last bus to Bilbao, I had to miss it this time. 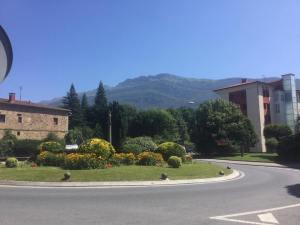