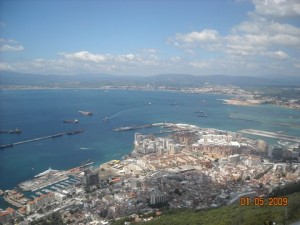 My apologies for the pun. Even in Spain, I continue to read Pearls Before Swine. Blame Stephen Pastis.

Gibraltar is a huge, giant rock at the southern tip of the Iberian Peninsula (The Greatest Peninsula in the World) that is a sore subject for most Spaniards and Spaniard wannabes like me. It technically belongs to the United Kingdom. Technically. During the War of Spanish Succession, an Anglo-Dutch force captured it from the Spanish, and the Treaty of Utrecht ceded Gibraltar to Britain in 1713. Three hundred years later, the Spanish are still not happy about it. In the summer, at the border crossing, there can be long lines. I was a bit miffed that I didn’t get a stamp in my passport when I went in 2009.

Gibraltar is 6 square kilometres (2.3 square miles) and has nearly 30,000 inhabitants.

My visit was another day trip from my trip to Málaga over the May Day long weekend in 2009. I was debating whether to take the too damn early bus or the early bus, and I took the early bus. I fell in love with the beautiful scenery in Málaga. On one side was the sea, and the other side were mountains. The bus stopped in La Línea de la Concepción, a border town in Cádiz, and I walked across the border (no long lines that Friday in early May) and the airport to Gibraltar.

I loved the rock! My Spanish teacher had told us stories. I loved the apes. I loved being able to see Africa. I loved buying “forbidden” sweets like Reese Pieces and smuggling them back across the Spanish border. (For the record, it wasn’t really smuggling as Reese Pieces are completely legal in Spain but aren’t marketed here or sold outside shops catering to American and British tourists. But it’s such a better tale when you say you smuggled Reese Pieces across the Gibraltar border into Spain.)

I don’t remember much about what I ate, but I do remember things being a bit more expensive. I also remember a cute waiter once I recrossed the border to catch the early evening bus back to Málaga and trying to understand “andaluz”. I vowed to go back to Gibraltar one day, but I’ve never made it back. 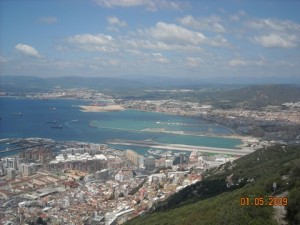 Here’s my private journal entry on Gibraltar, as it’s been six(!) years since my visit. Friday I woke up early to go to Gibraltar. I didn’t take the 7.00 bus as I needed sleep. I didn’t realise that there were two bus stations and was worried about missing the bus to La Línea de Concepción, the Spanish city across the border from Gibraltar. I didn’t. I even had time for tostada! The bus went along the most beautiful stretch of highway I have ever seen. The mountains and the coast of the Mediterranean. I got to La Línea and walked across the border without any problem. It was one of the biggest culture shocks of my life, being greeted in and speaking English. The rock is something amazing. I took the cable car up…saw so many monkeys, p…it might be the coolest thing I’ve seen. I saw Africa too! Legend has it that as long as the monkeys live on the rock, Gibraltar will be British, but once the last monkey leaves, it will revert to Spanish rule. I tried to tell the monkeys to go back to Africa, but they refused to listen. I found Reese Peanut Butter Cups and Reese Pieces and smuggled them across the border to Spain. Unfortunately they melted on me before I got to eat them. (I still ate the Peanut Butter Cups…the Reese Pieces are reserved for tonight.)

The Rock of Gibraltar is famous. Duh. It was one of the Pillars of Hercules and was formed during the Jurassic period. (Possible Jurassic World 2 plot: The Spanish use dinosaurs to win back Gibraltar?) Being 426 metres high (1398 feet), the rock dominates the landscape. There is a Moorish castle there today, plus a maze of tunnels I wouldn’t want to risk getting lost in. It is also the reason why we say something/someone is “like the Rock of Gibraltar”.

The Strait of Gibraltar separates the Atlantic Ocean from the Mediterranean Sea and peninsular Spain from Morocco (Ceuta is a Spanish city located on the African continent I have yet to visit. Yes, it is on my to-do list.) The strait’s narrowest point is 7.7 nautical miles, or 14.3 kilometres, or 8.9 miles and the depth ranges between 300 and 900 metres (980 and 2950 feet). The ferry across the strait takes 35 minutes.

Gibraltar is home to 300 or so Barbary macaques. Or rock apes (although they are technically monkeys.) If you look closely, you can see two in the photo. I didn’t want to get too close to them, but they were such fun to watch. As the monkeys were becoming more and more reliable on humans, they began to sneak into town, wrecking havoc and causing damage. Now feeding the monkeys comes with a fine of  £4000. Legend says that as long as the monkeys stay on the rock, Gibraltar will remain British. In 1942, when the population had dwindled down to just 7, Winston Churchille ordered that the numbers be replenished. The legend also says that the monkeys arrived from Morocco in a subterranean tunnel that has yet to be found by humans. The plot thickens… 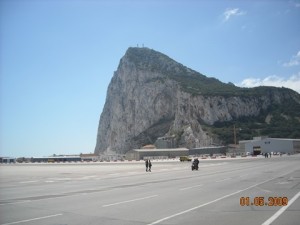 The airport, opened in 1939, is unique because the runway literally runs through a road and pedestrian crossing. It closes to cars and people whenever a plane takes off or lands, of course, but imagine having to walk across an airport runway every time you wanted to run across the border for Reese Pieces or a relaxing café con leche. A new road is currently under construction. Although the airport doesn’t receive much air traffic compared to Málaga’s airport, 415,000 passengers used it in 2014 alone. In 2012, it was voted one of the “‘World’s Scariest Airport Landings and Take-offs”, by readers of the Daily Telegraph.

Europa Point (Yet to be discovered)

I unfortunately didn’t have time to visit the lighthouse, mosque, shrine to Our Lady of Europe, Nun’s Well and views of Africa from the Europa Point. The tunnel from the Eastern side of the Rock of Gibraltar was apparently closed when I was there in 2009. It’s the southern most point of Gibraltar, but not the Iberian Peninsula, which lies 25 km away at Tarifa.

St. Michael’s Cave (Yet to be discovered)

I also missed out on St. Michael’s Cave. The upper part has been used for 2000 years, but the lower part was only discovered in 1942. The lower cavern may have been sealed for 20,000 years and resembles a cathedral. It also has a lake that holds an estimated 45,000 gallons. Tours generally last around three hours, so plan accordingly.

Llanito is the unofficial dialect which mixes Andalusian Spanish (el andaluz) and British English. It is based on a lot of code switching and loan words from various Mediterranean languages. A lot of words come from English but are pronounced in the andaluz manner. My Spanish not being the level I have now or the level that I thought I had when I was there (:P), I didn’t really catch any of it, but it has to a delight to listen to for language geeks like me. I wonder what “Gibraltar español” sounds like in Llanito. (Sorry to readers from the UK. I couldn’t resist.)