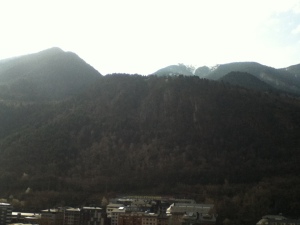 Andorra had been beckoning me for a while. Sitting there just north of Spain and south of France and one of the smaller countries in the world, it was calling my name. “Pablo. Pablo. Pablo.” I had to go just to say I had been to the one country in the world that has my  Catalan as its sole official language.

It was a last-minute trip. I had originally planned to go to Italia over Semana Santa with a pitstop in Barcelona. The year was 2012, and Spain was a bit miffed (as they still are) with the government. (I can state a fact without being fined, right? Tengo miedo de la ley mordaza…) So they decided to have a general strike on March 28, which cancelled my AVE high-speed train from Madrid to Barcelona, which meant even if I took the night bus after work, I would be hard pressed to catch my flight to Italia. Combined with some last-minute expenses (for those that read last week’s entry on bad flats and worse flatmates, it was when they decided the study would be a fourth bedroom), this was a sign that my trip to Italia would be better off postponed.

When life gives you lemons, make lemonade. So I found a cheap pensión in La Raval in Barcelona and decided to do a day trip to Andorra. I was at a point in my life where I just wanted to be in Barcelona, nothing else mattered. Now that the tourists have overtaken the city for good, my heart is back in Valencia, but I digress. So on my penultimate day in Barcelona for that trip, I caught a 6 a.m. bus to Andorra la Vella, the capital of Andorra. It was a 3 hour or so bus ride, and there wasn’t much of a border. The bus pulled into a bus station, and I got out to explore. 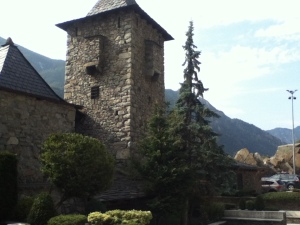 Andorra la Vella is small (22,256 people and 40,000 in the urban area according to the latest statistics) but has beautiful views. It’s the highest capital in Europe at 1023 metres (3356 feet) and is a popular ski destination. Being there in late March, I just took advantage of the opportunity to practice Catalán (they mistook me for Portuguese for some reason!), though a lot people I encountered were happier to practice their Spanish than many Catalans. Still, when I ordered my café amb llet at the bar near the bus station, a rush of excitement went through me. I explored the city and went shopping, as Andorra is a tax haven. I’ll be honest and say I don’t understand what that means, nor can I give an opinion on Greece or anything to do with economics. I studied journalism and Hispanic Studies. Humanities. No maths for me. But I can conjugate three verbs in Basque so there. 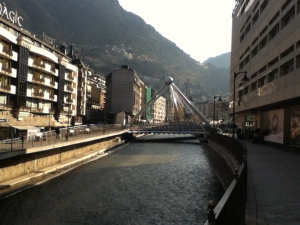 A day trip to Andorra does not do it justice. There is so much to see in the country located high in the Pyrenees. According to popular tradition, Charlemagne granted a charter to Andorra in return for their help against fighting the Moors. The Bishop of Urgell has run Andorra since 988, and today is a monarchy with two Co-princes, the Bishop of Urgell (in Catalunya/Spain) and the French President. Although not a part of the EU, they use the Euro, and the country itself is home to around 85,000 people. It is the sixth smallest country in Europe.

And of course…they have many wonders to see. 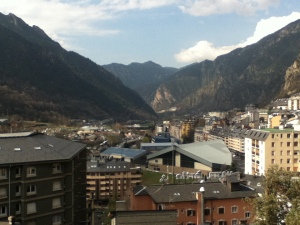 The capital city is a good base for exploring the small country and is located in the southwest part of the country where the Valira del Nord and Valira de l’Orient streams meet to form the Gran Valira River. It goes back to pre-Christian times. It has mild summer temps and snow winters. The old town, town hall and the Església de Sant Esteve and Santa Coloma Churches are the main sites (in addition to all the shopping).

The highest mountain in Andorra is 2,942 metres (9,652 ft) tall. Mountain climbers are naturally drawn to it, and there are many lakes on the western slopes. It’s located at the northwest corner of Andorra and has historically been a border between France and Andorra. It takes the shape of a pyramid. The trek to the summit begins at Arisnal, the closest town.

Located in the parish of La Massana, the lakes of Tristaina are part of one of the most popular hiking trails in Andorra. The three lakes are situated near Coma Pedrosa near the French border.

The Madriu Valley (Officially Vall del Madriu-Perafita-Claror) is a glacial valley that comprises 9% of Andorra and is found in the southeast part of the country. It’s Andorra’s only UNESCO World Heritage Site and is considered to be the heart and soul of the country. There are two summer-only settlements, and the valley can only be accessed by foot.

Meritxell is the patron saint of Andorra, and the Sanctuary dedicated to her forms part of the Ruta Mariana, a route of five sanctuaries. The others are Pilar in Zaragoza, Torreciudad in Huesca, Lourdes in France and Montserrat near Barcelona. (I’ve seen 2/5!) It’s located in the village of Meritxell (hence the name), and the original statue dates back to the 12th Century. However, due to an unfortunate fire in 1972, the original was destroyed and the new one is a replica.

I have a thing for medieval bridges, I know. The Margineda Bridge is located in Santa Coloma near the capital Andorra la Vella. It was built around the 14th or 15 century and crosses the Gran Valira river and is registered in the Cultural Heritage of Andorra.

The Iron Route is a short 4-kilometre long route that goes through the area historically known for its iron mines. It’s located near Ordino and is one of several “Rutas de Hierro” in the Pyrenees.

Bonus: For the skiers (not me, my ankle still hasn’t forgiven me for that 2014 attempt at snowboarding), check out Pas de la Casa, which was listened on International Business Time’s Best European Ski Resorts in 2011.