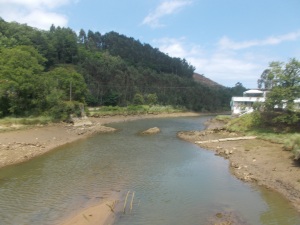 I have a confession to make. I took a shortcut today. Granted, the guidebook (which I want to throw out because it only has the shortcuts) told me to take it, but I still feel guilty and may have to return to do the Magdalena part another day. For now…onward to Santiago poco a poco.

I’ve been to Castro a few times before, so I had a quick pintxo de tortilla and café con leche to get me going before having my credenciales stamped at the Oficina de Turismo. I found the yellow arrows, and at first I thought I was never going to get out of Castro. I did get to see my favourite rocky beach inlet and found a new beach. However, the Camino takes you through the town instead of by a gorgeous beach. I guess they hope people will buy stuff.

My fave part of Castro

The Camino goes by the bull ring and through a camping. 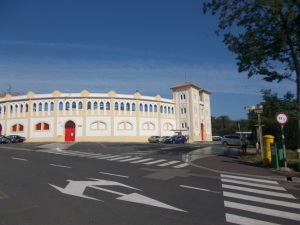 I am glad I looked back as there were just as many beautiful views looking back as there were going forward. I know Anna Kendrick keeps singing “I will never look back” in my current anthem “I Can Do Better Than That” from The Last Five Years, but she is referring to life. 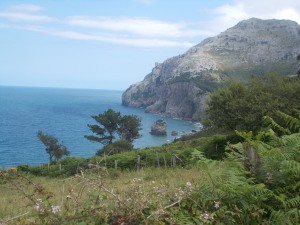 One of the many views from looking back

As I passed a few small villages (Allendelagua, Cerdigo) without any bars for a second café con leche, I took the time to enjoy the beautiful coastal scenery around me along with the beautiful mountains. I also enjoyed the village and the barking dogs. 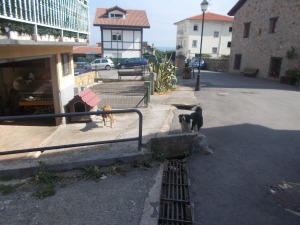 I didn’t go by the albergue in Islares despite it advertising “beach” in English. I’ve heard a lot of bad reviews about it, by the way. I caught up to a group of about 20 Spanish high school students on Camino excursion, and I walked quickly to get around them. I teach Spanish teens and am on summer break! ¡Por favor! I stopped at the (expensive) Islares camping bar to allow them to get ahead of me. 1,50€ for a café con leche con hielo (iced café con leche), 1,15 for a can of Aquarius de Naranja (orange European sports drink). Meh. And then came across a group of non-pilgrims…10 or so!

At this part of the Camino, I had to walk along the N-638 (I believe) road, which was quite busy. I wanted to spend some time at the beach near Islares (Playa Arenillas) as it was amazingly beautiful. Almost as spectacular as Urdaibai in Vizcaya.

I came across a solitary peregrino like myself at the junction of the shortcut and the traditional Camino through Magdalena at El Pontarrón de Guriezo. He opted for Magdalena, and I opted for the shortcut as I wanted to ensure I had a bus back to Bilbao. We wished each other well and I stopped for a tostada con jamón and second Aquarius de naranja for an early lunch (I eat at Spanish times). I knew it would be a while before reaching another place with food.

The road was hell. A ton of cars whizzing past me at top speed and very little shoulder space (still better than that bidegorri). I walked on grass when possible, but it wasn’t very possible. (I think I just broke a grammar rule with “very”.) At least there was a spectacular mirador (lookout) de Antonio Ruiz offering a magnificent view of Lienzo.

Two kilometres later, I found the Camino Camino again and was grateful. It goes through some people’s yards around Lienzo and offering more spectacular views and goes past some ruins of the San Julian ermita.

Every time I looked back I saw a more impressive view. Then I got to the top of the hill and saw Laredo in the distance looking as beautiful as Hawaii.

I also found a perfect walking stick today near Lienzo. I don’t usually use one, but I had fun with this one. I left it outside of Laredo for someone else to encounter. Laredo has a few rutas de senderismo (hiking/trekking paths) and someone may be able to use it. 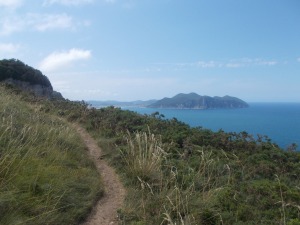 The Camino to Laredo

I had been to Laredo on a cloudy day in November (Nov. 1, 2013 to be exact), and I hadn’t been too impressed. My first impressions were totally wrong. I fell in love with the city today due to its Parte vieja. The beach is nice, and after arriving and having my crendenciales stamped at the Oficina de turismo, went to wade in the cool sea. 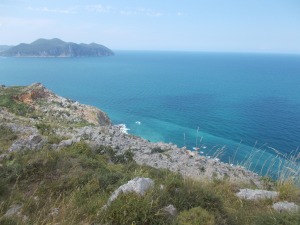 This time for sure, I will be staying in the albergues the next time around. (I thought the trip back from Laredo to Bilbao, capital of the world, was more expensive than it is). I think I may go to Laredo and do a short afternoon to Colindres, then Colindres-Güemes, then Güemes-Santander at the end of July to celebrate the last of my July class. I will have to overcome my fear of albergues (I’ve stayed in albergues before when I first arrived in Spain, but not Camino ones.)

I had a great day of soul-searching and am ready for whatever life is going to throw my way.