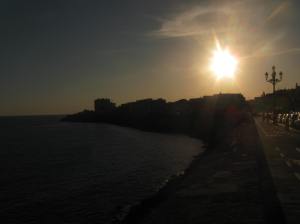 Tucked away in the southwest part of Spain, between Huelva, Sevilla and Gibraltar with views of Morocco, Cádiz is, like every Spanish province, a contrast of many things. And as a Pearls Before Swine fan, I just had to make a pun out of this entry’s title.

Cádiz is known for its beautiful pueblos blancos (villages with white architecture), beautiful beaches and being home of Jerez de la Frontera, where they make sherry (Jerez is Spanish for “sherry”. It’s also home of the rainiest part of the peninsula, the Sierra de Grazelema. I’m not even going to ask how a place could be rainier than Bilbao because I don’t even want to consider that possibility.

I spent two summers working at a summer camp in Jerez, a beautiful andaluz city famous for its horses and for its sherry. It wasn’t as hot as some places in Andalucía (in fact, some nights I needed a jacket). The less said about the camp, the better, but I do have fond memories of the city. My favourite was my afternoon off when I was able to visit Cádiz, the province capital city. I walked all around the town, imagining Havana in Cuba (which is said to be very similar). I remember having a very cheap café con leche and admiring a beautiful sunset over the beach. On the train back to Jerez, there were some lovely fireworks.

I also got to tour Tío Pepe, one of the sherry bodegas in Jerez. For the life of me, I can’t remember if I ever made it to El Puerto de Santa María or not. I do know I was in charge of a bunch of rowdy teens most of the time (which included supervising them playing golf, of all sports)    and had no time to explore this beautiful province…although with the winter I’m still recovering from, I’m not wanting to go to the rainiest point of the peninsula any time soon.

By the way, the people of Jerez strongly feel that flamenco was born in Jerez and not Sevilla. I asked my amigo andaluz from the east part of Andalucía who has no stake in this debate, and he says it is from the north part of Cádiz and the south part of Sevilla, so both are correct. 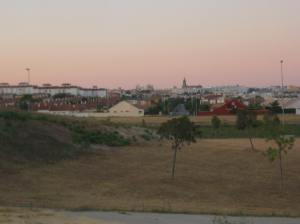 Cádiz is the oldest continuously lived in city in Spain and comes complete with an old town and old city walls. Nearly 124,000 people call the city home. The metropolitan area is over 600,000 habitants. The Phonetians called it “Gadir”/”Agadir”. It’s located on a sand spit of land, which causes development problems. Today, besides the beaches and the Bay of Cádiz, the city has a cathedral, many beautiful plazas and churches, the monument to the 1812 Spanish Constitution, the Tavira watchtower, a Roman theatre and the Castle of Santa Catalina. It also has Carnivales.

Río is not the only place in the world with Carnival. Every year, Carnivales become more popular in Spain as people dress in costumes. (As Halloween has been adopted into Spanish culture, the Spanish differentiate between Carnival and Halloween by only wearing scary costumes on Halloween. I’ve been called a liar when I explain that in the United States people wear any type of costume for Halloween. I digress). One of the most important Carnivals (if not the most important) is the Carnival of Cádiz. Cádiz has special groups called “chirigotas” who provide satirical music and performances as everyone dresses up in costume/fancy dress.  The “comparsas” work all year on their satire, and there are also “coros” providing music.

Jerez is the largest city of the province with 215,000 habitants and is the fifth-largest city in Andalucía. Located 12 kilometres (7.5 miles) from the Atlantic Ocean, it is included in the Cádiz metropolitan population of over 600,000. They have a cathedral, la Cartuja de Jerez de la Frontera monastery (a Bien de Interés Cultural), an alcázar (fortress), many churches and plazas, sherry and horses. Despite having lived there six weeks, I didn’t have much of a time to explore the city. I was left with a favourable impression from what little I did see.

Los pueblo blancos (to be discovered)

The pueblos blancos are villages where the houses all have white walls and red/brown tiled roofs. There are a series of connected villages with this look in Cádiz and Málaga. The towns all have a Catholic church and narrow, winding streets. They were first painted white during the Miguel Primo de Rivera dictatorship in the 1920s. There are a ton of hiking and other outdoor activity opportunities here.

Tarifa (to be discovered)

Tarifa, population of nearly 18,000, is located at the very south of the province on the Strait of Gibraltar. The word “tariff” comes from here as it was the first port to charge for its use. It’s home of the Guzmán Castle, the church of St. Matthew, the ferry to Tangier, Morroco, and many wind sports.

Sierra de Grazalema (to be discovered)

Grazalema is a village of 2200 people located in the foothills of the Sierra de Grazalema Natural Park. It is more or less the middle point of the Cádiz-Sevilla-Málaga triangle, allowing for easy access from any of the major cities. The park is home of many caves and vultures. It is said to be the rainiest part of the peninsula and has been a biosphere reserve since 1977. Nine Cádiz populations and five Málaga populations (including Ronda)  have territory within the park boundaries.

Sanlúcar de Barrameda (to be discovered)

Sanlúcar, population 68,000, is located in the northwest of the province on the banks of the Guadalquivir river, about 50 kilometres from Cádiz (30 miles). It is home to some beaches, the Santiago Castle and a few palaces (including city hall) and churches. It’s one of the cities that produces sherry. It’s also close to the Doñana National Park.

One thought on “Cádiz and some relaxing Sherry for not such a high tarifa.”