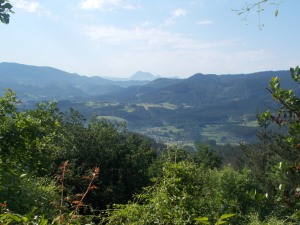 Today, June 5, 2015, was the first day since my first day on the Camino last August  where I began to feel a bit of frustration and debated just giving up. 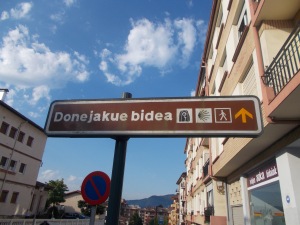 The seventh day for me started out well. I woke to my alarm without a problem, caught the bus to Gernika without problem and was in Gernika by 8:30. Many of the bar and cafés were just opening up, so I had to look around a bit before finding one that was 1. open and 2. had my traditional pintxo de tortilla de patata. I went past the famous Gernika tree (the old one died a few month ago, and they have replanted a new one. I plan on writing an entire entry dedicated to Gernika one day, so more on that later!) .

Selfie in front of the Árbol de Gernika

The road of of Gernika seemed to go on forever. I stopped for an Aquarius to go, and I was thankful for the citrus sports drink later on as the morning got hot. After passing the ermita de Sta. Lucía at the edge of town, the Camino finally went began its ascent up Bilikario.

I admired the views of Urikiola to the south and Urdaibai all around me. The Camino took me through a lot of rural Bizkaia, and save for an albergue in Eskerika, there wasn’t a whole lot of things around. 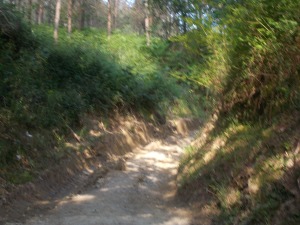 I did see a snake though, and I let it slither away before I could take a photo. It looked big. There was a random hiker out who gave me the creeps, so I took some time to reapply sunscreen and drink some water while admiring the views and gave him some distance. Other than a few farmers, he would be the last person I’d see for a while.

There were some muddy parts, but they were drying out after the 36ºC (90s F) day we had yesterday. A lot of the day was spent on paved backroads that were seldom used. 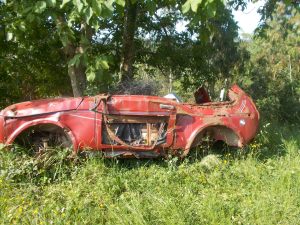 The landscape was beautiful, but if it wasn’t mountainous, I would’ve felt as if I were in northern Ohio. 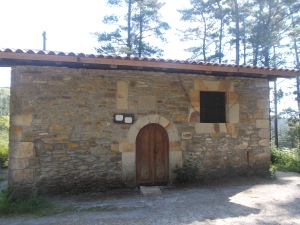 I got excited to see the trail to Bizkargi, as the town where I worked these past two years had a bar with amazing pintxos de tortilla con jamón y queso named for this mountain. I’m not sure if it was the actual mountain I was descending, but the trail went along the Camino.

I eventually arrived to Goikolexea, and I saw a few other pilgrims resting in the villages’s only bar that doubled as the tobacco shop. I ordered my café con leche and became a bit annoyed when the pilgrims ordered “two cafés solos.” I knew the couple running the bar probably didn’t even know “hello”, and I know I’ve known the word “dos” since I was four, thanks to María on Sesame Street. However, instead of getting mad, I’ve just decided that eventually I’m going to write an entry dedicated to Essential Spanish for the Camino. 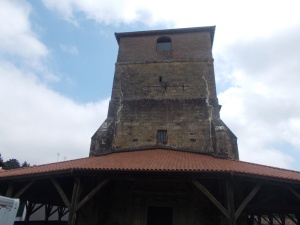 It was just another 1,2 kilometres or so to Larrabetzu, where some of my student live. I was quite impressed with this village and took some time to explore it before deciding it was too soon for lunch at 13:00 (1 PM) and headed on the last 3 kilometres to Lezama (where even more of my students live.) 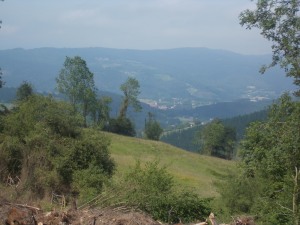 I will say that Larrabetzu is very Basque. I will also comment that the pilgrims who knew “café solo” but not “dos” had almost caught up to me on the way to Lezama, as they apparently skipped Larrabetzu! It’s definitely their loss. I am open to meeting other pilgrims (especially ones from Spain!), but I will always walk by myself, I think. I’m just an independent (and a INFP personality type, which means introverted to the core!) It’ll be interesting to see how I handle the albergues once I reach Santander.

Lezama, home of the Athletic de Bilbao’s training facilities, didn’t impress me as much. I went in to take advantage of a Pilgrim’s Menú to learn that the kitchen was already closed. This is where my frustration kicked in. 14:00 (2 PM) is the normal eating time in Spain, and here I am being punished for having adapted to Spain’s culture. The guy could see I was hungry and treated me to a pintxo de tortilla and Aquarius de naranja on the house. So nice of him!

The albergue wasn’t open, so no stamp. I decided to go on three more kilometres to Zamudio (where even more of my student live!) Zamudio is also quite a nice town, but the Camino leaves a lot to be desired here, as it passes a lot of factories and the like. I wasn’t able to get a stamp, but it’s okay, I think. There is a really nice ermita outside of Lezama worth mentioning practically in the middle of the road. 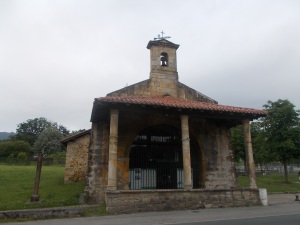 I now have less than 700 km (681 supposedly), and my next day will be quite the short day as it’s just around 7 km from Zamudio to where I live, Bilbao, Capital of the World. 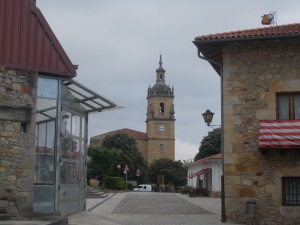 I also started Infinite Jest on the way to Gernika this morning, which is definitely preparing me for a heavier backpack.