Madriz. For many, this city is the bane of my existence, and when I wrote about the province of Madrid (which has little to do with the capital city as the province has so many beautiful towns and villages and mountains and the city is a chaotic whirl of chaos where the only peace and quiet you can find is at 10 in the morning on Jan. 1st when everyone is sleeping away their hangover) back in September, I had no intention of writing about the city. I find the city vastly overrated, but different strokes for different folks. So I wanted to take the time to write about the city as there is a ton of things to do and see there. And there are, of course, more than SetMeravelles in a city of 3 million. For the record, Madrid is the third biggest city in the European Union, after London and Berlin.

On my way back from Italia, I spent a day in Madrid. I originally had planned a trip to southern Spain before heading back to Bilbao when I booked the flight from Madrid, but unfortunately financial concerns are way too real for me at the moment, so it was cancelled. This one day reminded me of how, as a closeted twenty-something, my dreams of Madrid revolved around Chueca and falling in love with a dream guy, mi media naranja (soulmates in Spanish are half oranges. Today I find that I’d rather find a whole orange as I am a whole orange and two oranges would be better than trying to mix halves that have been separated.). My Madrid dreams were crushed by the reality of living in a big city when I was just not cut out for it. The stress of living in a city that never slept, where the people constantly are badmouthing anything not from the city (especially the Catalans, and as a fan of Barcelona and Catalan culture, I definitely did not fit in Madrid outside my Catalán class!) and a million and one niches and still not being able to find the niche for you? It got to me. The madrileños are said to be friendly, but I was more alone in Madrid than I have been since I was a closet case. In one of the gayest cities in the world, I was unable to feel okay about being gay as I was not (and am not) a Greek god who models for Abercrombie. In the gay world of Madrid, unless you are a Greek god modeling for Abercrombie, you’re the radioactive scum at the bottom of the Ría Nervión in Bilbao (an infamously polluted river). I suffered a lot of panic attacks from the masses of people everywhere I went.

Also, it really irks me that the city concentrates on being bilingual in Spanish-English when they fail to recognize that the country of Spain has four languages. Every Christmas, the Metro of Barcelona writes “Merry Christmas” in the four languages: Bon nadal (Catalán), Feliz Navidad (Spanish), Bo Nadal (Gallego) and Zorionak (Basque). In Madrid, you might see Happy Day Nativity or however they might attempt to translate “¡Feliz Navidad!” because they think by translating something into a language that is not spoken in their country they are doing a good job. I think if they acknowledged the fact that there is more than one language spoken in their own country they would be doing a lot more to smooth over high tensions.

It’s obvious from the above paragraphs I have a lot of pent-up feelings about the capital city and my feelings are still pretty raw nearly two years after making my escape. A lot of it has to do with the fact that I have learned that I am just not a big city person, and another large part of it is the fact that there is no coast anywhere near Madrid.

Now that I got the negative out of the way, I can focus on the positives of the city. The city is constantly reinventing itself and there is something to offer everyone. Parks, museums, a well-functioning metro system (sometimes) , fountains, shops, nightlife, and its central location in Spain means there is a ton of opportunities to travel throughout the Greatest Peninsula in the World! For city lovers, Madrid is a must-see place. It has a vibe similar to New York City with the bonus of being the Spanish capital.

I will also give the madrileños credit for at least always saying “¡Hola!” when coming across one while hiking, unlike the Basques who sometimes will offer an “Hola/Aupa/Kaixo” and sometimes will just glare at you. Granted, I’m likely to glare at you too, but whatever! I appreciate friendliness.

And with that, without further ado…

Originally a give from Egypt, the Templo de Debod is located near the Plaza de España in the centre of Madrid and offers the best sunset of the city. The temple was originally located near Aswan, Egypt and the first cataract of the Nile and was dedicated to an important Egyptian goddess whose name I won’t type for fear of what types of Google searches would come up for this blog (yes, this groups shares the name with an Egyptian goddess). The temple was under threat of floods after the construction of the Aswan High Dam, so to show their gratitude to Spain for helping them out with saving the temples of Abu Simbel, the Egyptian government gave it to Spain in 1968. Today there is a museum that somehow is almost always closed whenever I go. Next to the park is the Parque de Oeste, which in my opinion, is better than the Parque Retiro but not as famous. For the life of me, I can’t find any of my photos of Templo de Debod. 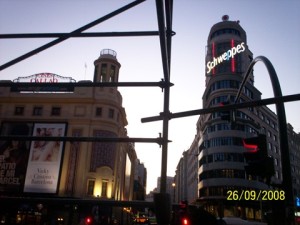 The Spanish Broadway is the connecting street between Calle Alcalá and Plaza de España. It’s the busiest street in Madrid, runs close to Puerta del Sol and passes Callao (FNAC!). It has a few theatres, more than a few Starbucks (I can think of four Starbucks alone on this street) and many shops. It also features a lot of Madrid’s most famous buildings. It’s undergone many names over the year (especially during the Spanish Civil War and the years of Franco), but has been named simply Gran Vía since 1981. Construction on “Main Street” began in 1910 but wasn’t finished until 1929. The incredible Plaza de Cibeles is also found along Gran Vía.

Madrid is famous for its nightlife. Chueca is the neighbourhood taken over by the gays (although lately La Latina has been becoming a more popular place), La Latina has many tapas and other bars, and Malasaña is the alternative-Bohemian neighbourhood. No matter what your scene is, you’ll be able to find it in Madrid.

The Prado Museum is one of the most important museums in Spain and houses some of the most important Spanish art in history. (Picasso and Dalí are not well represented here, if at all, but Goya, El Greco and Velázquez are. It is home of the famous Las Meninas by Velázquez. Very close to El Prado are two more important museums of art (which I have never visited to be honest as art’s not my thing unless it’s Picasso or Dalí and even then…), the Museo Reina Sofía (which does have Picasso’s Guernica) and the Thyssen-Bornemisza Museum, which has Italian, English, Dutch and German works of arts. I was just informed by a friend that this triangle of art has more art per square metre than anywhere else on the planet and that there is more art in the basements than they have room to showcase. You learn something new every day! 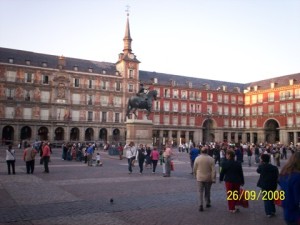 “A relaxing cup of café con leche in Plaza Mayor”. So before soon-to-be ex-mayor Ana Botella’s speech, no one went to Plaza Mayor for a cup of café con leche. It’s more typical to have a bocadillo de calamares (fried squid and the only seafood I can eat without gagging), people watch or visit a Christmas market. The rectangular plaza was built during Felipe III despite its orgins going back to Felipe II and is modeled on the plazas in Valladolid and Salamanca (Valladolid is my fave of the three, but Salamanca is the most famous). A stone’s throw away is another important plaza, Puerta del Sol, which is home to Kilometro (KM) 0, the center and starting point of all Spanish roads. It is more or less Madrid’s Times Square, and it is the busiest place on New Year’s Eve to eat the 12 grapes. It’s Spanish tradition to eat 12 grapes, one for each month, at the first 12 strokes of the clock of the New Year for luck, as one year the farmers had too many grapes and didn’t know what to do with them. Puerta del Sol seems to reinvent itself every two weeks or so. Originally it was a gate in the old walls of Madrid. Another important site in Puerta del Sol is the Oso y el Madrono, the bear and the tree. Tío Pepe is still there, despite the Apple Store’s temporary removal of the iconic advertisement.

The Royal Palace is “officially” the home of the Spanish King and his family, but they actually reside at the Palacio de la Zarzuela. The current palace is on the site of a former fortress which burned to the ground in 1734. Felipe V ordered a new one built. Alfonso XIII was the last monarch to live here, although the president of the Second Republic, Manuel Azaña, also lived here. It has over 3000 rooms and is the largest palace in floor area in Europe.

While Antwerp might have the “most beautiful train station in the world”, Atocha is one of the most beautiful train stations in the Greatest Peninsula in the World. It’s definitely one of the busiest with connections all over the peninsula. While waiting for a train, one can visit the Bosque del Recuerdo, a forest of 192 olive and cypress trees in memorial of the 192 people who died in the terrorist attacks on March 11, 2004. I swear I remember seeing this forest in 2003, but my memory must be playing tricks on me. They also have a separate memorial for those who died that day where visitors can live a hand silhouette in memory of those who died that day.