I have been to Italia four times now (you can read about them here, here, here, here, here and here), and four trips have not done much to quench my thirst for exploring this country. I know I have a few more trips left in me to the bel paese, as I have to discover Sicilia and the south, Naples and Pompeii, Capri, Cerdeña (Sardinia in English) and its Catalan-speaking villages, Torino (Turin), Genoa, Bologna, Lago di Como, the country of San Marino…the list goes on and on.

However, in the four trips, I have managed to see quite a lot. It’s going to be hard, and I know as if I get to continue exploring these jewel of a country, these are apt to change.

So without any further ado…the Set Meravelles of Italia. I’m limiting myself to only two in Rome as if not, they might all be in Rome, which isn’t even my favourite Italian city! All of these are pretty touristy, I must admit. But they are all touristy for a reason! I’m just going to cheat and say the entire cities, as it’s hard to settle on just seven. And my beloved Fontana di Trevi is undergoing some reconstruction right now. I had to mention it as I am in love with that fountain, but it didn’t make the list this time. 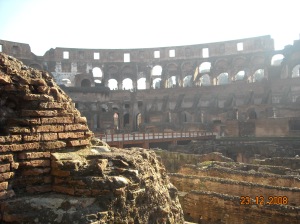 The Colosseum of Rome is one of the most famous monuments in the world. It was the biggest Colosseum and could seat between 50,000 and 80,000 spectators. It was named a New Wonder of the World in 2007 by the New Open World Corporation. Over the years, the damage has been done by earthquakes and stone robbers. It is well worth the 13€ I paid in 2008, and I’m sure it’s even more expensive now. 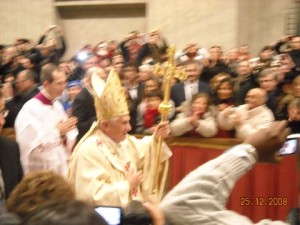 The Sistine Chapel in the Vatican Museum and St. Peter’s (San Pietro) Basilica are just two of the things to see in the Vatican. I was lucky enough to attend the Misa de Gallo (Midnight Mass in Spanish) in 2008 with the third best Pope in my life (there have been three Popes in my lifetime), which was an experience in itself. The Sistine Chapel is well worth the winding walk through the Vatican Museums, as it took my breath away. I did not take any pictures there. 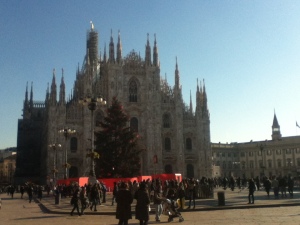 The Cathedral of Milan, dedicated to St. Mary of the Nativity, is a major architectural achievement. It’s the fifth largest church in the world and largest church in Italy and took over 600 years to finish (It was finally finished in 1965). While in Milano, also check out the painting of The Last Supper, but make sure you buy your tickets in advance. The tale of this famous painting is quite interesting, as the church it is in was heavily bombed during World War II, yet the wall it is on survived. Milano also has some famous fashion designers I hear… 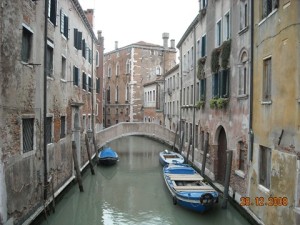 Venice, the city of the canals, is located in 117 islands on the east coast of Italy. The entire city is a UNESCO World Heritage site. The population is 260,000, but only 60,000 live in the area with the canals. Recent years have brought lots of flooding, and the city is said to be sinking. They are losing a lot of their art unfortunately. The day I went, I nearly froze to death. Fa freddo da cane, as the Italians say (It makes the cold of the dog, or it’s dog cold I guess.) I’d like to return to explore the romantic city again one day. But there are more pressing things to do at the moment. 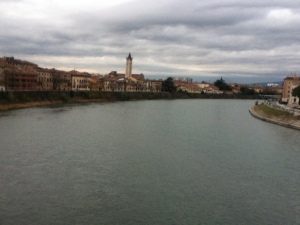 Oh, fair Verona, how beautiful you are, with your own colosseum, your Adige River, your House of Capulet, how you impressed me with everything you are. The city of 265,000 (and UNESCO World Heritage Site) is often ignored by tourists for more popular destinations, which is a blessing for me (fewer people!) and a curse (people are missing out!) It’s one of my favourite cities I’ve been to ever. 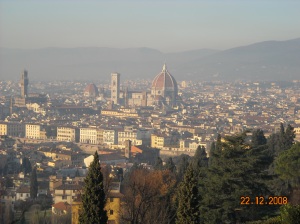 The famous Florence, which in While You Were Sleeping, protagonist Lucy dreamed of one day visiting, has so much to offer. Picturesque monuments, famous statues and incredible sunsets, and usually under the Tuscan sun. 379,000 habitants are lucky to call this beautiful city home. The historic centre is a UNESCO World Heritage Site.

Monterosso al Mare, Vernazza, Corniglia, Manarola, Riomaggiore. Some of the most spectacular coastline and mountains with these five unique villages mean another UNESCO World Heritage site. While you may no longer be able to have a tranquil Italian experience here, you can still find some peace and quiet on the lesser-known trails and no matter where you go in this National Park, you’re going to see beautiful sights. Bella Italia, grazie mille!