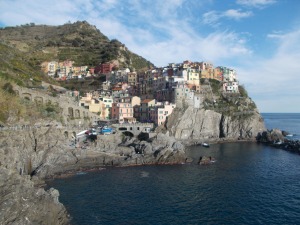 Le Cinque Terre been on my bucket list for the past several years, ever since someone first told me about it. In my mind, I had planned on a nice, peaceful holiday hiking near these five villages built in the mountains on the Ligurian Sea not far from Genoa. Nature, mountains and sea.

As the train from Pisa, where I had spent the first part of the day, arrived in La Spezia and the rain stopped, I began to get excited. I changed trains in La Spezia. As the train pulled into the station in Riomaggiore, the first of the Cinque Terre…my heart sank and my anxiety levels raised as the hordes of tourists began to fight each other to board the train.

I’m not talking about a few tourists. I’m talking Times Square on New Year’s Eve style tourists. Everywhere I went, it was English-only. As an English teacher and lifelong student of Spanish, when in Spain, when I am not working, I just don’t want to hear the language at all. The same goes for Italia. I was expecting and prepared for a ton of tourists in Pisa and later in Florence. I was NOT expecting so many in Cinque Terre as the majority of people I have met had no clue that this place existed. I did my best to make Aquarius Limón (I don’t like lemonade) out of lemons, but I did have a panic attack from all the people on Sunday afternoon unfortunately. 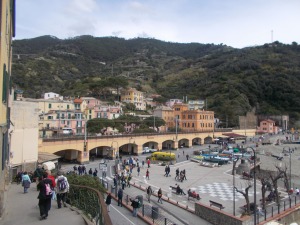 This is a break in the tourists. They were usually in Times Square NYE masses. (Monterosso)

The thing is though…Cinque Terre is incredibly beautiful.

I did my best to ignore the tourists as I got off at the train station in Corniglia. I made my way to the hostel, which for being a hostel, had nice facilities, I have to admit. I was not happy when people were talking at 2 in the morning or when people were snoring either. I may have to rethink this whole Camino de Santiago thing! (A joke). 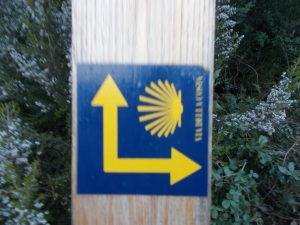 Even in Italia, I can find these arrrows.

I showered and went off exploring Corniglia, the one village not directly on the sea. I had my daily gelato (I only eat ice cream and pizza when in Italia now and yet still do not have a six-pack) and meandered through the village. I walked down to the sea, and then found the “closed” trail to Vernazza. 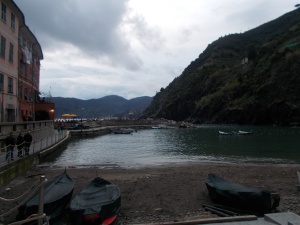 A 2011 flood left the Cinque Terre damaged, and several trails of the famous Blue Trail remain closed four years later. This trail isn’t gated off, and many more seasons hikers brave it. I was one of them, and I found a lot less tourists. (I only went as I saw people ahead of me doing it!) The trail was incredibly beautiful, and I had the added bonus of it being sunset.

I arrived at Vernazza an hour later. I think Vernazza is my favourite of the villages. It has a castle and has a more rugged, medieval feel. I was looking for something quick for dinner as I bought the train ticket back, and for some reason, thought it mattered what time I went back. I could’ve taken a later one, but oh well.

Being the night before Easter, they had mass at 10 p.m. in Corniglia, and the adults left the children out to make a small bonfire.

Sunday I woke up from a restless night of sleep (hostels as I previously said) and went to my new favourite café in Corniglia for my morning cappuccino (don’t drink it after 11:00! Sure, they’ll serve it to the tourists, but Italians don’t drink it after 11:00. Remember the saying “When in Rome, do as the Romans do?” Rome is Italia!). The waiter let me practice my rusty Italian with him. I then went to the train station to buy my official Cinque Terre pass for the trains and hiking trails (12,50) and caught the train to Vernazza and went to the castle, which was not included in the pass and cost 1,50€.

I then set off for Monterosso al Mare, waiting a bit for a large tourist group to pass. As I walked through the natural wonders (many waterfalls, plus the sea and mountains), I had to stop many, many times for large groups of tourists to pass by. 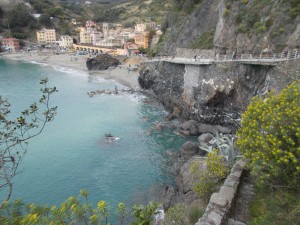 I had lunch in Monterosso (lasagna) and played with some cute puppies. They’re so much friendlier than Basque dogs. 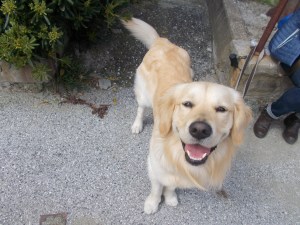 I meandered the streets for a bit before having my gelato and then a walk along the beach, then I caught the train to the first village, Riomaggiore. I was getting tired of the tourists everywhere and looked for quiet, tranquil places. An espresso macchiato improved my mood slightly, and a fresh bottle of water helped even more.

I found my way down to some rocks on the water to allow the sea to sooth my nerves. I also found some horrible English. Sea storm case! What did the sea storm do, pray tell? (I’m already going to hell anyway!) I went up to the church to admire the views of the village from above.

The Lover’s Trail was still undergoing repairs, so I waited for an increasingly delayed train in the increasingly number of people to catch the train to Manarola, the last village for me. 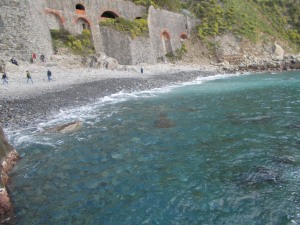 Manarola I explored quickly, as I had to recover from a panic attack while waiting for the train. Meh. It was also beautiful. I decided to take the alternate route through the mountains back to Corniglia instead of risking the train. The main trail between Manarola and Corniglia was closed, so the other trail went through some steep mountains and the town of Volastra. It was nearing sunset, which provided me with some more awesome views. Part of the trail went through someone’s front lawn. I felt bad about that one, but I suppose they would be used to it. There were some stray hikers, but they were the people looking for a more peaceful time, like myself. I arrived back at Corniglia exhausted but satisfied with the trip.

Waterfall between Vernazza and Monterosso

In the end, I loved Cinque Terre. I do wish I had gone in February though when there would’ve been colder temperatures but fewer people. I’m not sure what the solution is, but I know these precious villages are not meant for mass tourism. I can only imagine what it’s like in the summer if Easter was this crowded. However, I cannot deny the beauty of the Cinque Terre and surrounding landscape and understand why it is so popular.

I tried my best to get some sleep, and I slept better. After one last cappuccino in my fave café, I checked out and went down the staircase from Corniglia to the train station one last time to catch the train to Lucca…

A continuación…and sorry for any formatting issues. I’ve spent two hours working on trying to make it perfect, but I’m not perfect, so neither is this blog! All my html skills are from 2003 🙂