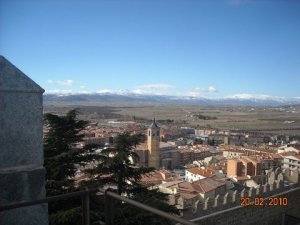 Ávila, a small Castilla y León capital of 59,000 habitants located 1132 metres (3714 feet) above sea level 115 kilometres north of Madrid, remains one of my favourite cities in the Greatest Peninsula in the World and a place I’ve wanted to return to ever since my first (and really, only) visit in 2010. I definitely prefer it to its neighbours Segovia (which I also love) and Salamanca.

Ávila is said to have the highest number of Romanesque and Gothic churches per capita in Spain, along with bars and restaurants. Along with Toledo, it’s one of the most medieval cities in Spain, and by visiting the city, you feel like you’re stepping back into time. The city is surrounded by medieval walls, which for a nominal fee, you can visit and walk along the top of. It was declared a UNESCO World Heritage site in 1985 for good reason. 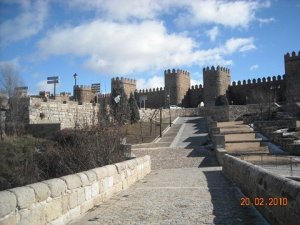 It was a snowy morning in late February 2010 when I visited Ávila. I caught the morning train from Chamartin as I really didn’t feel like going to Estación Sur de Madrid (whenever does anyone want to go there?) and the price was about the same. A couple of hours through some gorgeous countryside, and I was in Ávila to have my morning tostada con tomate y café con leche. I remember going instantly to the muralla (wall) and paying to walk above it and falling in love with the city and the wall. It was cold but sunny, and I was quite happy to see snow once again. I meandered through the city, planning a return trip that I still have yet to make. I left something left to see, the Los Cuatro de Postes, so I would make sure to come back. I made it to the Springfield and shopped the last bit of their rebajas (sales) before heading back to Madrid. I was tired from the day’s meanders. 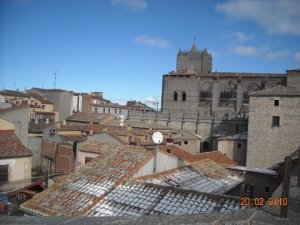 Yeah, I’ve never really made it back, but I did see the Los Cuatro de Postes from a bus stop of 15 minutes on the way to a summer camp. And I made it back to Ávila provincia (province) in 2010, to a beautiful village called Candeleda. I was in the mountains a bit away from the town, but I fell in love with the brilliant sunset I saw every night.

My personal blog’s comments on Ávila were short and to the point. I always go back and read them to refresh my memory. I was going through a BAD flatmate situation at that time, which explains why it was so short as I had been complaining about that instead of writing on my day. Youth!

Yesterday, I went to Ávila for the day. We read about it in class. It’s an amazing city…highest province capital in Spain. It has this “muralla” (wall) surrounding the city. It’s just how I like my Spanish cities to be. A clash of medieval and modern. Way cooler than Zaragoza. 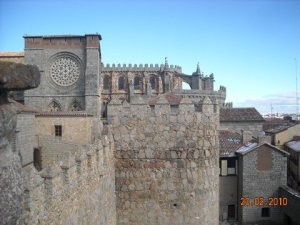 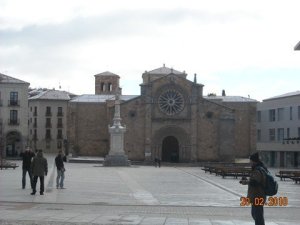 The province capital is a wonder in itself. Higher in altitude than any other Spanish capital, the city offers spectacular views with a medieval flair. It has a ton of churches to visit, including a cathedral and basilica, many beautiful plazas to have your relaxing café con leche (or irlandés (Irish)) and a ton of charm and history. 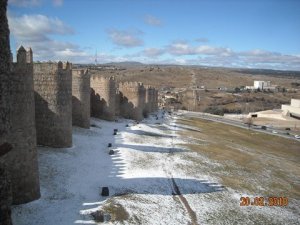 The city walls were constructed between the 11th and 14th centuries and has a perimeter of around 2516 metres (7548 feet or 2516ish yards), which is the equivalent of 88 blocks. There are 9 gates, and the average height is 12 metres (12 yards or 36 feet) and is the largest fully illuminated monument in the world. Only about half of it is open for pedestrians, and it’s worth the price of admission to walk wherever you can on top of these mighty walls.

The mountains of the Gredos are one of the largest in Spain, and its highest peak, Pico Almanzor is 2592 metres (7776 feet) high. The mountains are home to many flora and fauna, and part of the mountains belong to the protected area Parque Regional de la Sierra de Gredos. 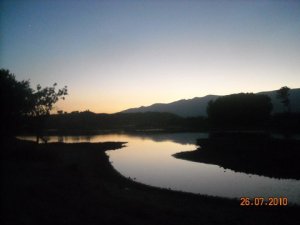 I was lucky enough to work at a summer camp located out in the countryside near Candeleda where I had this sunset every night. The “Andalucía de Ávila” has around 5200 residents and is home to the festival honouring their virgin Chilla in September and the Candelas in February. Former British Prime Minister John Major has spent many summers here.

Arévalo (Yet to discover)

Arévalo, population 8100, is a village whose name stems from the Celtic word “arevalon”, meaning “city near the wall”. Today its North Walls can still be seen, and the rest of the walls are undergoing restoration. It also is home to a Castle, el Castillo de Arévalo.

While only boasting 1600 habitants, the small village of Madrigal de las Altas Torres has one very important citizen, Queen Isabel I of Castilla, better known as the Isabella in Ferdinand and Isabellla, the Catholic Kings who finished the Reconquista and funded Christopher Columbus. Today it has some medieval walls and a chance to see España profunda.

Castro de Ulaca (Yet to discover)

Castro de Ulaca is an archaelogical zone near Solosancho and has been a “Bien de Interés Cultural” since 1986 (Place of Cultural Interest). It’s located in the Sierra de la Paramera and has an altar, a sauna and various houses from the Vettones in the century 1 B.C.

3 thoughts on “Ávila…a wall around the city.”