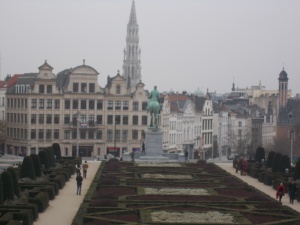 Thursday morning, I went off by myself to see Brussels. From what I had read, it sounded a bit too city for me, and I ended up being right about that. The older I get, the more I prefer smaller cities with a laid back vibe and everything isn’t rush rush rush all the time. With a metro population of 1.8 million, I knew it would be quite different from the Belgium I had seen so far on this trip. While technically a part of the Flemish region (or its own entity, Brussels-Capital region) and bilingual, French is more common here than the Flemish Dutch.

I caught the 8.54 train from Antwerp to Brussels and was there in just under an hour. After leaving from the Most Beautiful Train Station in the World Antwerp Centraal, I was a bit disappointed in Brussels Centraal. I made my way to the Grote Markt, better known in its French name, the Grand Place (or what the Spanish would call, Plaza Mayor). It was impressive, but the guide books had built it up too much. I had fallen for the hype and wanted even more. It was beautiful, I will admit. As beautiful to be called the top thing to see in all of Belgium by a guide from El País? No.

It took me a while to orientate myself with the map that cost 50 cents at the tourism office in Grand Place. I eventually did and went to see Manneken Pis, a statue of a boy peeing water into a fountain. The statue is one of Brussels’ most famous landmarks and fun to see, I must admit. 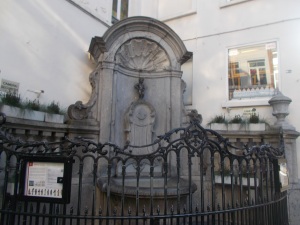 I had my last Belgian waffle, this one with strawberries so it was healthy, and perused a used-book shop. 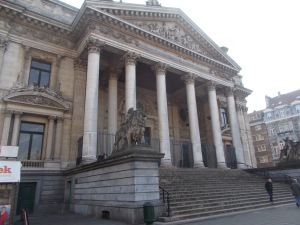 I found my way to the Bourse, which was an incredibly beautiful building, and to Saint Catherine, a beautiful church nearby. 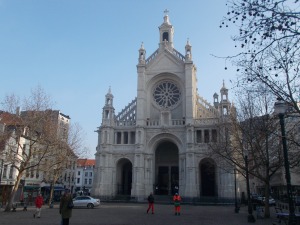 I then made the mistake of taking the metro to the European Parliament buildings. This is by far the most confusing metro I have ever taken in my life, and my Belgian friend later concurred, saying he would’ve advised me NOT to take the metro had he thought about it. The ticket makes for a good souvenir, I guess. The street I randomly took to get to the European Parliament had the Spanish Embassy, and I got all nostalgic for Spain when I saw the flag. I later questioned myself how Basques and Catalans would feel about having to go there should they run into problems in Brussels. I’m too politically correct sometimes! 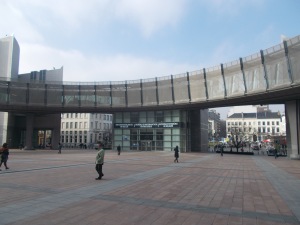 I made my way back via the park and the Royal Palace, which was another impressive building. 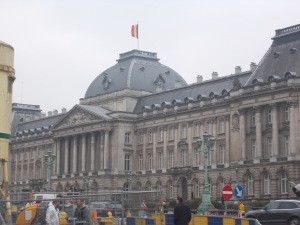 The stairs past the library to the city centre gave some beautiful views of the city. I had a cheap lunch and a café au lait, feeling okay about missing out on the Atomium, a 103-metre (338 yards) sculpture built for the 1958 World’s Fair. If I’m ever back in Brussels, I’ll go back. I saw it from the train, and it looked cool. It just looked like it was going to pour down rain any minute, and it never did. If I had stayed, though, we all know I’d still be drying out! That’s my traveler’s luck.

I’m glad I visited Brussels, and for city people, this would be an incredible city. There is a ton to do. For me, I prefer Bruges, Antwerp and Ghent, smaller cities where I felt more relaxed and not rushed by the trappings of city life. Overall…I’d recommend visiting all four cities if possible. There is a ton to see and do in Belgium, but for this trip, these four cities gave me a great introduction.

Next up will be the SetMeravelles of Belgium.

One thought on “Brussels, Capital of Europe.”