Located an hour north of Madrid, Segovia is an incredible medieval city that would have to be even more incredible covered in snow. I’ve visited the city three times and have also managed to visit a few of their coolest pueblos. The capital city and province are famous for their cochinillo (suckling pig. Babe fans might not want to try this delicacy), which is the food everyone recommends trying there. For not being a foodie, I did try this and I have to agree. It is delicious.

Segovia capital is a typical Castillian-Leonese capital city, small, medieval, quaint, and amazing. Its population tops out at 57,000 people and is in located in the Guadarrama mountains. Its Roman architecture, including that famous aqueduct, made it a UNESCO World Heritage City in 1985. It also has an old Jewish quarter

My first trip to Segovia was way back in 2009, when I was still trying to meet my goal of travelling to every Spanish comunidad autonoma and wanted to pick up Castilla y León before headed back to the States for the summer. I fell in love with the typical stuff, the aqueduct, the Cathedral, the Alcázar that supposedly is the inspiration for Disney’s Cinderella castle, the medieval streets…I had a chance to study here instead of Toledo in 2003, and I found myself playing a lot of What-Ifs. However, both city have their merits, and Toledo is/was an amazing experience in its own right. I returned to Madrid happy with my first visit, dying for my second.

The second wouldn’t come until 2012. I’ve said it before, and I’ll say it again. There are just way too many places in Spain to see and experience to be able to do in one lifetime. Life always gets in the way. As the 15th of May is a holiday in the city of Madrid and many of the villages close by, I took advantage of having the day off to go to Segovia for a second time, and I was just as enchanted as I was the first time. It’s small enough and close enough to Madrid for a daytrip, although the bus seemed to be a bit expensive for an hour-twenty minute journey.

The third trip was a May Sunday morning in 2013. La Granja de San Ildefonso is a small village 13 kilometres/7.8 miles from Segovia Capital, and I took the bus from Madrid to spend my Sunday at this beautiful palace and gardens. I remember stopping at a bar with a Route 66 theme, and the bartender was so excited to meet someone who had been on Route 66 and was from the States. My freaking accent always gives me away. It was one of my favourite daytrips from Madrid ever.

I was in Segovia again in 2013 when I went on an excursion with the Madrid gay Christian group. On the way back from visiting the Pueblos Negros de Guadalajara , we stopped in a lovely village called Ayllón. I got a free poster from the Oficina de Turismo that is still hanging in my room in Bilbao.

Many of the places in Segovia province that I want to see have horrible times for buses. For example, Pedraza only has one bus a day from Segovia at 17:00, so you have to stay the night. This is not to avoid tourists, but it’s for the people of the village who catch the bus in the morning to spend the day in Segovia shopping and whatnot, then return on the bus at 17:00. But for those without a car, it makes things more complicated. I remedied this situation on my move from Madrid to Bilbao on 30 July 2013. I rented a car and drove through the province, picking up villages like Pedraza and Sepúlvedra off my list. Pedraza didn’t have a good place to eat, I remember, so I found a great restaurant and had a late lunch (even for the Spanish) in Sepúlvedra. A great way to close out my time in Madrid. 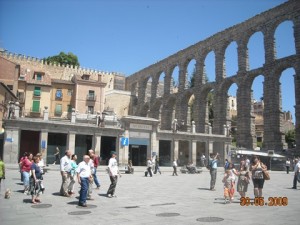 The aqueduct of Segovia is the most famous place in the city and province. It is believed to have been built in the first century AD and is believed to have been commissioned by the Roman emperor Domitian. It transported water from the Fuente Fría (Cold Fountain. Things sound better in Spanish.) some 17 km/11 miles away to Segovia and was an impressive feat for the Romans. It operated until the mid 19th century. Today it’s easily the most photographed aqueduct in Spain and is currently a part of the World Monuments Watch to ensure its protection well into the future.

Originally built as a fortress, the Alcázar (fortress) of Segovia has also been a palace, a prison, a Royal Artillery College and a military school. It is currently a museum and a military archived storage facility. In 1474 the Catholic Queen Isabel took refuge here after the death of Enrique IV  and was crowned the next day Queen with the support of Segovia’s council. It is one of the inspirations for Cinderella’s Castle, perhaps giving credence to the myth that Walt Disney was born in Almería. 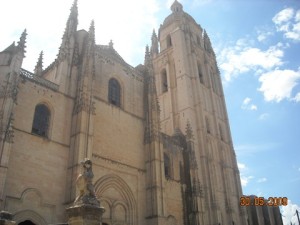 The Cathedral of Segovia is one of the last Gothic cathedrals in Europe built before the Renaissance style took over. It’s located in Plaza Mayor in the centre of Segovia capital and was built in the 16th century after the previous one had been destroyed in a rebel attempt that lasted months. Crescentius of Rome is still buried here.

Ayllón is a small village of 1400 people that was a random place that I visited and fell in love with. It’s 94 km from the capital (or 56,4 miles) and the Aguisejo and Riaza rivers pass through the village. The treaty that ended the wars of the Interregnum between Portugal and Castilla was signed here.  It is listed as a place of cultural interest (Bien de Interés Cultural) by Spain.

Pedraza is a very small village of 500 people located 37 km/22,2 miles from Segovia capital. It is a medieval village complete with walls and has a castle. It’s one of those villages built on a hill that offer spectacular views, and it’s well worth the drive or staying a night if you must rely on that crazy bus schedule to get here.

Located partially in the Parque Natural de las Hoces de Río Duratón, Sepúlveda is a village of 1200 citizens and is another place of Bien de Interés Cultural. It has been important in several of Spain’s many wars throughout history and offers several churches and a castle in ruins.

Sometimes known as the Spanish Versailles, La Granja de San Ildefonoso is an 18th century palace with incredible gardens and incredible views of the surrounding mountain countryside. Despite not having any elephants, it has been a popular hunting site for Spanish kings through history. Today it is open to the public and if you’re there for the festivals of San Fernando and San Luis, you can see the fountains on full display. The palace began construction by Felipe V and modeled on Versailles in France. It was the summer home to many kings, but I just don’t see King Felipe and Queen Letizia summering there today due to all the tourists. Maybe the abdicated King Juan Carlos and his wife Sofía might visit since they have more free time now.

Bonus: Riaza (yet to visit)

Riaza is another quaint medieval village. I know there are even more in this medieval province to discover one day.