At the Lady Gaga concert in Barcelona at Palau Sant Jordi this Saturday evening (Nov. 8), the diva said something very true that hit home when taking a break from dancing and singing her hits.

It was in 2003 when I first visited Barcelona, and I have been there ten times now. I have had a lot of close calls with almost being able to live there, but so far nothing has panned out. I now have a B1 certificate in Catalán and am preparing the B2 next year. (My degree is in Hispanic Studies (Spanish), but I’d probably have a C2 if I had money to take the DELE). Everything about Barcelona is a dream. Despite being a city of over a million people, Barcelona has incredible mountains like Tibedabo and Montjuïc, and it has an awesome beach in Barceloneta (just don’t go there alone at night.) It is more international than the Spanish capital Madrid, as you can find any language being spoken here. I’ve read that Barcelona is the second most visited European city now after either Paris or London. It’s overtaken Rome (and the other city) for good reason. It is at once an extremely modern city with a very close connection to its past.

This trip wasn’t the best trip I’ve experienced. As so many other creative types are, I am prone to anxiety and depression, and I’ve been fighting a major bout with both for the past several months. This trip also coincided with the news that back in the States, my aunt (who is only 45) is in the hospital after a stroke. (Her prognosis for recovery is super good, but it’s still scary and worrying). It rained Saturday morning, the time I had set aside to explore La Ruta de les Aïgues close to Tibedabo. And there were problems with the pensión I was staying in. Great location in Plaza Urquinaona, but when it’s cheap, you get what you pay for. Runners who don’t speak Spanish, Catalán or even English. Yet they can find a job there, and me who is an English teacher bilingual in Spanish and halfway to being trilingual in Catalán can’t get jack? Yeah, it’s a bit infuriating.

However, I made the most of the situation. I got to visit a beautiful village (look for its write-up next week as I look for the Set Meravelles in Barcelona province outside the capital) called Arenys de Mar. I found a great new gay bar called Museum decorated like a Renaissance Art Museum (hence the name). I successfully avoided Les Rambles, that all-too busy street which can be overwhelming at the best of times. I did miss out on some of my favourite neighbourhoods like Gràcia, Barri Gotic and Born. But I’ll be back soon, I know.

Barcelona is a city that has something for everyone, even bitter, jaded, travelers like me! It’s hard to decide on only Set Meravelles for this incredible city. But I’m going to try! Try by cheating on how I write it up. Plaça de Espanya can be Montjuïc, right? I am dying to visit Poble Espanyol, but I haven’t yet, so it doesn’t make the list.

Montjuïc is the mountain (or hill) right next to the port. There is a funicular that will take you halfway, and you can walk or take a skylift the rest of the way. It has a castle that was a prison during the Civil War where many atrocities took place. It offers stunning views of the city and Mediterranean. And it is also the home of Palau Sant Jordi, where I have seen Lady Gaga twice, the Olympic Stadium and the Olympic flame. It also is the home of an impressive (from the outside at least) art museum and if you climb the steps from Plaça de Espanya, you can see more incredible views of the city. I found out this trip that there is a water fountain show to the tune of Freddie Mercury’s “Barcelona”. 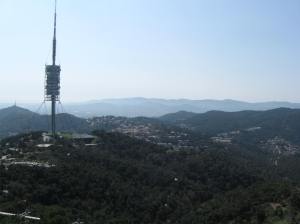 Joey Tribbani may not have actually hiked here, but it does exist. There are more incredible views, plus that Ruta de les Aïgues I’m dying to hike. There is also an old amusement park still in operation (but don’t expect Port Aventura!)

The Architecture of Gaudi is present all through the city, but these are the two most famous places. I’m lucky that I had already visited Parc Güell twice before as now I hear it comes with an entrance fee. I know Spain and Catalunya are in crisis and need the tourism money, but it is still sad that they will make a Euro when and where they can. The Sagrada Familia remains impressive and unfinished. I haven’t ever entered, but it is on my bucket list. 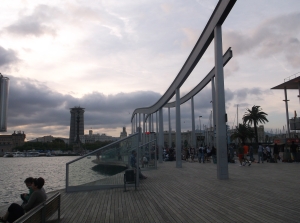 Barcelona built a cool shopping centre and a cool wooden drawbridge right on the sea. I usually indulge in a Starbucks and sit and people watch or sunset watch and daydream of a life in Barcelona with a decent job and a great husband and two golden retrievers. One of my fave places to visit.

Més que un club, Barça is a great football team. They have a great stadium I have yet to visit as tickets are about half of my monthly paycheque. Força Barça!

These two neighbourhoods on the right side of Les Rambles are a fantastic place to lose oneself in. You can find the Cathedral of Barcelona, the Cathedral of the Sea (the one that Falcones book was written about), town hall and tons of chill bars to hang. There’s a reason why the tourists love it. I have to give these barris credit where credit is due. Picasso has a museum here too.

One of my top 10 reads ever is La Sombra del Viento/The Shadow of the Wind by Carlos Ruiz Zafón. While I’d rather forget the third book ever happened, the Cemetary of Forgotten Books inspired me when I first read the book in English in 2007. I read the sequel in Spanish in 2008 (El Juego de Ángel) and was once again transported to the cemetary of Forgotten Books. On one of my 10 trips, I found a bookshop designed to be the cemetery (I like to think it is as real as Hogwarts (Hogwarts is real, right? I hate being a muggle!) in el Barri Gotic. However, I have only found it once. I regret never buying anything there. And I hope to find it again one day.

Note: I have so many much better photos of BCN, but they have been lost over the years. Darn.

One thought on “Barcelona. You are a dream.”