Without a doubt, Spain is my favourite country and the place that feels most like home, despite not being born here. I have intentions of staying in Spain indefinitely, finding me a nice, intelligent, witty, cultured and cute Iberian Boy to settle down with and raise golden retrievers with when we’re not exploring the world together. However, that quote that I often refer to, if you want to make God laugh, tell Him your plans, is oh-so-true. If I ever had to leave The Best Peninsula in the World (Iberia, duh!), I would hope a plane or boat straight across the Mediterranean to another charming peninsula, the one shaped like a boot, that oh-so-gorgeous Italian peninsula.

Growing up, like so many people, I always dreamed of one day travelling to Italy. There is something about the food, the culture and, of course, the history that beckons us to visit. In university, when I found out that learning a third language would help my case when I made my Spanish minor a major, I immediately decided on Italian. I only have a A2 level, but with my Spanish and now Catalán background, when I find myself in Italia, it comes flooding back to me. And I have already found myself in Italia three times in my six years of Spanish living.

My first Christmas living in Spain, I took off to Italia for the holiday. At that time, I was pretty naïve about European travel. I thought “Oh, flying from anywhere in Spain is okay!” I was living in Linares in Andalucía and flew in and out of GIRONA. This meant an overnight bus trip from Linares to Barcelona and an overcharged bus from Barcelona to Girona. I also thought that travelling in Italia would be cheap and 700€ would go a lot farther than it does. Ay yi yi, youth.

Christmas 2008, my Italian dream came true. I flew from Girona to Pisa. I had read the AAA guide book to death about Italia and thought I knew how the bus system worked. I read the directions to the hostel over and over and was so eager to try out my Italiano. I didn’t understand much, especially after my ear had spent the last three months trying to make andaluz into understandable Spanish. I somehow made it to the hostel, which was quite close to the Leaning Tower of Pisa. At the early hour of 20:00 (8 PM) , I found myself having my first Italian meal. I’m pretty sure it was pizza.

Pisa is a small town without much to see other than the Tower. At the time, I didn’t even know that you were supposed to take the photo pushing the Tower. My biggest travel regret ever is not paying to climb the tower. I figured that with Ryan Air, Italia would always be there and I’d be back soon to climb it when I was well-settled into Spain and had some money. It could be something I could do one day with that strong Iberian lad that is still out there waiting for me to conquistar his heart. Since then, if there is something like that, no matter how many touristy it is, it is well worth the money to go ahead and do it than have that regret in the back of your mind. I was feeling disappointed by Italia at that point in time. Pisa was not the best introduction to Italy.

Another thing I learned that first trip is to pack lightly. I had a huge suitcase that I had to lug to the train station so I could go to Firenze (Florence). The train was about an hour, and I felt a rush of excitement listening to all the Italian on the train. I tried to pretend I was Italian, but reading in English gave me away. I fell in love with Firenze over the next few days. I paid the money to see the Davide at the Galleria dell’Accademia, ate a ton of great pasta, pizza and gelato, went window shopping and crossed the Ponte Vecchia a million times. My friend from a Mariah Carey message board came down from Genova my third day in Italia to show me places in the city I would have never found on my own. Firenze and Pisa are second on my list of places to return to after that return trip to Greece I have waiting for me.

The next stop was Rome. Rome will never be a favourite city of mine because it feels more like an amusement park than an actual city. It is chaotic, and at the same time it is a city that everyone must see at least once in their life. I’ve been there twice now, and all those coins I’ve thrown in the Fontana di Trevi must ensure I’ll be back one day. (I am absolutely, positively obsessed with the Fontana di Trevi. La dolce vita a tutti!) My first stop that first visit was to the Colosseum, which is as amazing and beautiful and touristy as advertised.

I saw the Sistine Chapel and was mesmerized by the immense work. (I also wanted to smack the idiots taking photos of it, but the security guards berated them before I had the chance. It says no photos because any type of picture will ruin it. The Musei Vaticani should have lockers to place all electronic devices. Seriously. Respect the rules, folks.) I had gelato on a cold day in the Piazza di Spagna. 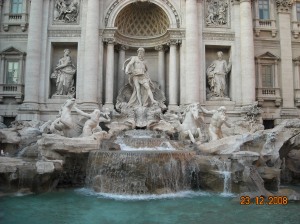 I also went to my first, and to date ONLY, midnight mass…at none other than St. Peter’s Basilica in the Vatican by the Pope. The nuns who gave me my reserved tickets warned me that if I really wanted to attend, to get there early to line up and then be prepared for a bunch of people to appear out of nowhere when the doors opened at 10 PM and also to be prepared to physically fight with Italian nuns to get in. “It’s okay. They see it every year, and they fight dirty.”

American nuns encouraging men to fight with Italian nuns who would probably win. This is Italia, la dolce vita.

After four days in Rome, I had a long train to Milan that arrived late. I didn’t spend much time in Milan, just seeing the Duomo, and I’ll write about Milan in a future entry about my next trips to Italia. The first trip left me cold and wanting more. I then made my way to Venice to end this first 10 day trip to Italia. It was also cold in Venezia, but nothing prepared me for the fairy tale atmosphere of the city. The canals made the city even colder, and as I crossed the Gran Canal to get lost in its maze of streets and canals, I ducked in several cafés to order cappuccino to warm up. Another regret was not taking a ride on the gondola, but my bank account and wallet were just out of money.

This first trip opened my eyes a lot. It taught me more about myself, having to get by in a country whose language I only spoke the basics of. It taught me a lot about budgeting. And it taught me that less is more, especially when packing for 10 days abroad. Now I am more likely to go to a country for less time and focus more on a few major places than try to cram in an entire country in 10 days. I’ve since returned to Rome to see more of it (they say three months in Rome sightseeing every day won’t give you enough time), and returned to Milan and went to Verona….to be continued.

And yet I feel that I have just scratched the surface of the world’s second greatest peninsula. Viva la bella Italia.