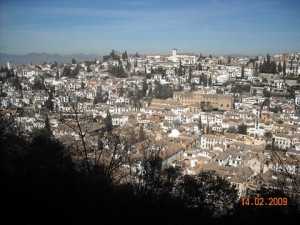 Granada is my favourite Spanish city that I can actually call Spanish and not offend everyone, although fourth favourite city in the part of the Iberian peninsula lying between Portugal and France/Andorra. My two favourite cities are Basque (San Sebastián-Donostia and Capital of the World Bilbao and Catalán Barcelona.) Granada is one of the most enchanting cities I have ever visiting, and I try to route any trip through Andalucía so I have at least one night in this enchanting city. I’ve been here a total of four times now, and each time I find something new to fall in love with.

My first time was in February 2009. I used a four-day weekend to explore the town and forget about being single on Valentine’s Day (really, Spain, this is one holiday you can let the guiris keep, you’re better off without San Valentín.) I immediately fell in love with the city of 237,000 people. My favourite part was by far the labyrinth of the Albayzín, a cluster of small streets that keep their strong Arab influence. (Granada was the last Muslim holdout to fall to the Reconquista of the Catholic Kings in 1492, the most epic year of Spanish history. For that reason, Granada still has a very Arab feel to it.)  My hostel was at the heart of this part of town, and I explored it as much as I could, always getting lost. However, in Granada, getting lost is half the fun.

I was lucky as I knew someone studying at the Universidad de Granada who could show me around. This is how I discovered the best part of Granada: watching the sun set over the Alhambra palace from Mirador de San Nicolas. This lookout is always full of people, and 95% of the time they are singing flamenco.

My friend also showed me the university and went with me to tour the Alhambra. I took off on Sunday to the Sierra Nevada, not because I wanted to go skiing but because I wanted to play in snow. Finally, finally, finally, I had snow. There was a traffic jam going up the hill to the mountains, and Spain being Spain, there managed to be a Osborne toro on the highway. Five years later I still remember the fun I had seeing snow and feeling at home.

I went back to Granada a few months later on my way back from Málaga and spent the night just to have an excuse to see the streets once again. My third time was 2.5 years later (I’m getting old) in December 2011 on the way back from Almería. The city still charmed the pants off of me. My fourth time was on the way back from Ronda in June 2013, as I knew by moving to Bilbao it would be harder for me to go to al-Andalus. Each and every time, the city enchants me (enchanting is the best word and most used English word, encantador being the word in Spanish) and leaves me waiting for the next trip.

While the vast majority of the province awaits my exploration, the city is amazing enough to have no shortage of meravelles. I know the city has been written about a million of times, but whatever. I love it, and I want to go back again soon, whenever I have money to go to al-Andalus. Two meravelles await me my next trip.

The Alhambra is Granada’s main tourist attraction, and while we all know I like to avoid touristy stuff, this one is worth the admission price and the long waits to see. The Alhambra began as a Moorish fortress in 889 and was rediscovered and rebuilt in the mid-11th century and later converted into a royal palace in the 13th Century. It’s a UNESCO World Heritage site, and it is a must-see attraction for history buffs. 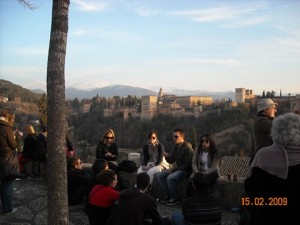 Hands down, one of the best places in Spain to watch the sun set. It’s located in the Albycín barrio directly across from the Alhambra and offers stunning views of the Arab palace. There is almost always someone playing flamenco, and it is always crowded with locals and tourists alike. The sun setting over the Alhambra is a site for romantics everywhere. 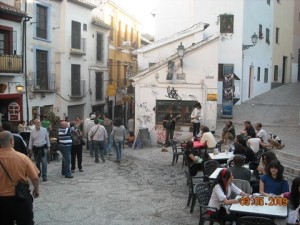 One of the most popular and well-known barrios in all of Spain, the Albycín is a maze of small streets. One of the streets you can take to get here is the Calle Calderería Nueva, which has many Arab shops and restaurants. Most of the buildings are white, and you never know when you’ll come across a plaza or a fountain. One of the easiest places to get lost even with a map.

The Sacramonte is a barrio de gitanos (gypsy barrio) set apart from the rest of Granada. The neighbourhood is beyond the Albycín, found by following the Río Darro. Many of the houses are built into caves on the hill. It wasn’t until my third trip to Granada when I finally discovered this place. A gypsy invited me into see the house, which she had open to the public, and then tried to sell me beer (I hate the taste of beer. Wine is better.) for about 3€. This is Andalucía…beer is a Euro, I think! 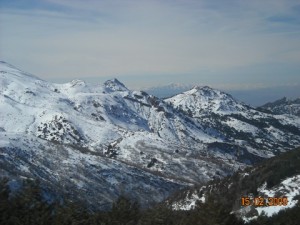 The Sierra Nevada mountains are stunningly beautiful. The ski station is about 45 minutes from the city, but as I don’t ski, I went just for the opportunity to play in some snow. It was well worth it for the views alone.

Salobreña is a town of 12,000 people located on the coast of Granada, complete with a castle and a 6000 year history. It’s off the beaten track between the beaches of Málaga and Almería (Granada has beaches too!).

La Alpujarra is a mountain range in the southern part of the Sierra Nevada. It is the subject of Gerald Brenan’s South from Granada (and the film based on it). The isolation of the area has kept it from progressing as quickly as the rest of Spain, and many people have left the villages to find work elsewhere as the economic crisis has hit the area hard. Still, one day I would love to explore this beautiful region and find out more about it for myself. For more on this region, check out Con Jamón Spain’s blog…someone who actually lives there and is quite informed on the region.

9 thoughts on “Granada. The Southern Enchantment.”