(This blog originally appeard in The Dahlia Scene in August as a guest-post. I wanted to have the whole entry here for my own records.)

Greece is a place that had been on my bucket list for quite some time, and after visiting, it remains high on my bucket list to return. It is a fascinating country full of history, beautiful places, monuments and great food. It has mild winters and superhot summers. When I finally had the opportunity to travel to Athens in March 2013, it was a dream come true.
A lot of people call Athens disappointing, but for me, the area close to the Acropolis (home of the Parthenon) is one of my favorite places I have visited. It was quite touristy, I admit. It also has a lot of things to see and do. For 12 Euro, you can get a week pass to visit. (If you’re a EU student, you can get in for free! Students from outside the EU receive a reduced price, and most Sundays in the winter offer free admission.) 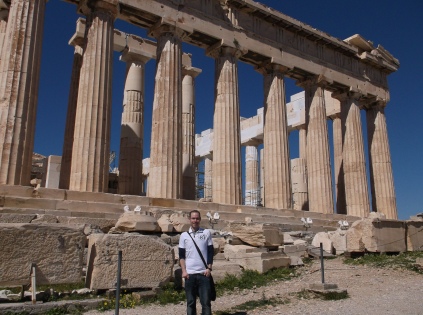 The Parthenon is like no other place. High above Athens, it was the place to go at the height of the Greek empire. The best view to look at and contemplate the Parthenon is on a hill nearby, which you can access for free. Walking through the Parthenon is worth it though. Here, you can find people from all over the world. I actually practiced my Catalán on top of the Acropolis. 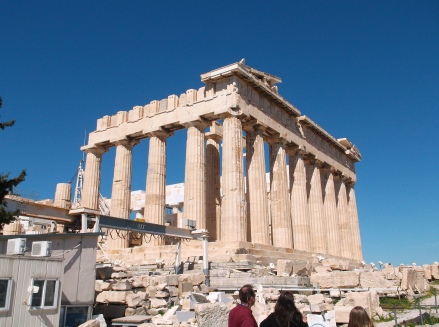 The Changing of the Guard is another must see. During my time in Greece, there were a lot of protests. It was cool to see the protesters split into two to allow the guards through for the changing. I prefer this Changing to the more famous one in London. I watched it a few time during my short stay. 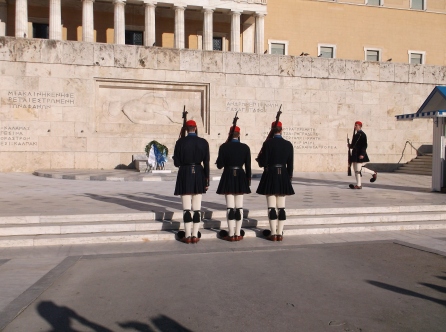 My favorite daily ritual was finding the best view for a sunset. The most famous sunset in Greece is probably Cape Sounion, 69 kilometers (43 miles) south of Athens. You can watch the sun set over Posiedon’s Temple and the Aegean Sea with some of the most amazing views and colors ever. There is a bus from Athens for those without a car.  In Athens, for an incredible sunset over the city, make your way to Lycabettus Hill, not far from the Syntagma Square and the Parliament Buildings where the Changing of the Guard takes place.

The food in Greece is some of the best in the world. The typical Greek salad, a bit marked up in tourist areas, is great, and moussaka (think lasagna made with eggplant, in the photo buried underneath the fries/chips) is now one of my favorite foods. Greek yogurt with honey is an excellent dessert. Greek coffee is also worth trying, or if it’s hot, the frappes are also quite good for the coffee addicts. And for the record, I did try ouzo, on a full stomach, and while I am a lightweight, it’s true…after only one ouzo, I was drunk.

One thing to remember when travelling for Greece is to pack patience and an open mind along with the sunscreen and camera. Things can be changed last-minute. I originally had planned to go to Meteora, a place with several monasteries on top of spectacular cliffs.
This plan was changed because my trip coincided with the Greek Independence Day on March 25th, and they had a nice transportation strike planned that day that I didn’t know about. Instead, I went to Corinth and Napfoli on the Peloponnese Peninsula. Corinth had no clear marked bus stops, and the bus I needed was a good 6 kilometer trek from where I was, as I had gotten off at the wrong stop. When I finally got to Napfoli, I was tired but excited as Napfoli is astonishingly beautiful. As I kept an open mind to last-minute changes and went with the flow, I found a suitable alternative. The Greek culture is not known for its organization. 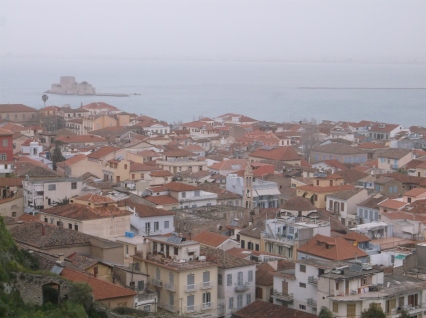 On the bus back from Napfoli to Athens, I had a moment of panic. I had stopped in Argos, a 7,000-year old village near Napfoli, in an effort to see more of Greece. I got the last ticket on the bus to Athens, and I ended up losing the ticket after taking my seat. The control borded the bus, and as I speak no Greek, I started to panic as I couldn’t explain the situation. However, the cute guy next to me was bilingual and explained it for me. No extra charges, and a sigh of relief.
One of my regrets is only having six days there, which did not give me enough time to explore the islands. Santorini and Mykonos are on my must-see list. I also have to return to go trekking in Meteora and to see Delphi along the way.
Greece is an incredible country that I want to return to as soon as possible. There is something for everyone here.