Valladolid is not a name familiar to most people who visit Spain. It’s a rather small province and capital that stays out of way of more famous nearby provinces like Segovia, Ávila and Salamanca in the comunidad autónoma Castilla y León, although it is the de facto capital of Castilla y León. Granted, every September, the small village Tordesillas makes news for their controversial traditional slaughter of a bull (different from a normal bullfight, which most Spaniards would also label “slaughter”, but that’s neither here nor there) during the Torneo del Toro de la Vega. Other than that, Valladolid is known for having the “purest” dialect of Castilian Spanish. As my university has a graduate program exchange with the University of Valladolid, I knew of this province about 200 kilometres north of Madrid long before my arrival in the greatest peninsula in the world.

My trip to Valladolid came in August 2012. Valladolid is one of those provinces that is very hot in the summer and freezing in the winter. On the Friday in August when I went, it was 35º Celsius (95ºF). I first stopped in the medieval village Medina del Campo, which was preparing for their medieval festival that weekend. I stopped off for my usual café con leche y tostada con tomate and explored the town before hiking up to the impressive Castillo de la Mota. I had seen the castle from the bus on the way to Asturias the previous year and had wanted to go there ever since. It was well worth the wait and the visit. I had to catch the 12.44 train to Valladolid capital, so my time at the castle was unfortunately cut short. 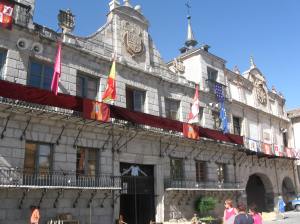 It’s a short train trip from Medina del Campo to Valladolid, so I arrived in time for lunch. I was catching the last bus to Madrid that evening, so I had plenty of time to explore the city of 300,000 people. Needless to say, I was impressed. I found the Plaza Mayor much nicer than the one in Salamanca, and the city itself seemed to me a pleasant mix of Castilla and surprisingly, Bilbao. Perhaps it comes with speaking the “castellano más puro”, but the city had a taste of elegance and sophistication. People seemed to dress up a bit more here than in Madrid, and the cafés had a flair of modern posh style. My favourite parts of the city include the Plaza Mayor and the park Campo Grande (literally translated to “Big Field”. Things sound better in Spanish.) I also enjoyed a walk along the river. As Valladolid couldn’t be more landlocked, they’ve turned part of the river into a beach.

There are a lot more things to see and discover in Valladolid, as it is a province rich in nature and history. The Catholic Kings Fernindad and Isabel were married there in 1469, and Christopher Columbus died there in 1506. (Apparently the people of Valladolid like to be the centre of controversy.) The Castilian Kings called Valladolid their home in the 15th Century, and Felipe III made it the kingdom capital from 1601-1606.

For the foodies (which I’m admittedly not. I could eat tostada con tomate and paella valenciana (chicken and vegetables) every meal), the typical dish of the region is lachazo, or baby lamb.

45 kilometres from the province capital, Medina del Campo is a medieval small city of 22,000 habitants. “Medina” is arabic for “city”. It still has a few remains from the old walls around the city. The most famous attraction is the Castillo de la Mota, located on an artificial hill (mota) just outside the city. Cesare Borgia was a prisoner here at one time and was restored during the Franco era due to its ties to the Catholic monarchs.

The Campo Grande is a beautiful park over 300 years old in the centre of the city. It’s in the shape of a triangle and is the home of many birds, including lots of peacocks. It’s a nice place for shade during those hot summer afternoons. 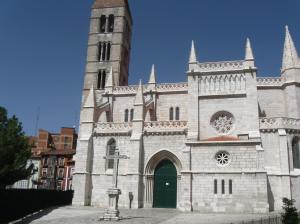 Valladolid is home to many beautiful churches, including their unfinished cathedral (they lost the funding to finish building it due to the capital being moved from Valladolid to Madrid in the 1500’s). Only half the church from the original design was built. San Benito, San Miguel, San Pablo (¡Vivan los Pablos), El Salvador, Santiago, Santa María la Antigua and San Juan de Letrán are some other interesting churches in the city.

The Duero River is the third longest in the Iberian peninsula and flows through Valladolid. It flows through five provinces of Castilla y León (and through Portugal to Porto). Valladolid has turned its banks into a beach at one part, and it provides a great walk through town.

The University of Valladolid is one of the oldest universities in the world, established in the 1241. It is still an important Spanish university, although it doesn’t have quite the fame as neighbouring Universidad de Salamanca.

7. Tordesillas (to be discovered)

While the village of 9000 people is more infamous today for its controversial festival, Tordesillas once played an important part in world history. The 1494 treaty between the Catholic Monarchs and Portugal was signed here which stated where Portugal and Spain could and couldn’t colonize. It still has a castle and appears to be worth the time and effort to visit one day.

2 thoughts on “Valladolid. The Pure Spanish.”