Being on the Camino is a transformative experience, and I’ve only done two “días sueltos”, as they say in Spanish. Separate days, or “loose days” with the literal translation, just doesn’t sound right. It gives me peace, quiet and tranquility.

As I already did the part from Pasaia to Donostia (San Sebastián) last summer on a whim (I had heard about a beautiful walk between Pasaia and Donostia and stumbled upon it by pure luck), I decided to start from Donosti Thursday morning. After waking up at the all-too early hour of 6:00, I made it to the Moyua metro station in Bilbao to go to Termibus to catch the bus from Donostia. I am recording this part of it too as I want to have an incredible honest and accurate of my pilgrimage to Santiago. As crowds tend to give me anxiety, and as Aste Nagusia is still in full force in Bilbao, and as Bilbao is technically Spain, that meant an overcrowded metro of drunks still partying. This triggered a panic attack. Grrrrrr.

However, by the time the bus took off to Donostia and the sun was rising over a beautiful Basque day (so rare this summer), I had full recuperated and was only full of excitement and adventure for the day ahead. I finished Franzen’s Freedom and started Divergent while grooving to Mariah and then my worship playlist. Donosti is my favourite city on the planet, so I know the streets somewhat well. I wanted to have something else to eat before setting off, but my fave bar only had crossiants, which I do love, but not what I was wanting. I had to walk around a bit to find a bar with pintxos de tortilla, something I find extremely odd for the Basque Country. When I went to the Cathedral, they were having mass, and I sat in for a good minutes. Once upon a time, I was going to convert to Catholicism but decided against it as I did not want the last Pope to get converts. As I really like Pope Francis, I should look into it again.

I went ahead to the tourism office where a beautiful Basque Lad stamped my credentials and loved the fact I said “eskerrik asko” and spoke in Euskera to me. Euskera was a theme for the day, as when I stopped to eat they greeted me in Euskera, and because of my vocabulary of 30 odd words (ten of them being the numbers 1-10), proceeded to NOT switch to Spanish despite the fact *I* switched to Spanish quickly. On the way back home, I later ordered my café con leche in Euskera (kafesne bat), and the waiter was super excited. I need to learn more Euskera, but that’s another entry in itself. 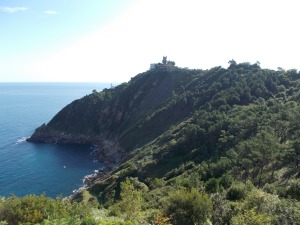 One thing I noticed today was a lack of ermitas (small churches) along the second part of the Camino. There were a couple just a bit off the trail, but I skipped them. I regret that. Small churches can be quite beautiful. The walk, however, was incredible, spectacular, amazing, beautiful…all the superlative adjectives you can think of. It took me through the shores of La Kontxa (Concha), a neighbourhood of Donostia, a dairy farm, some green mountains (Igeldo) along the coast to one of my favourite villages, Orio. After Orio, the Camino goes through some more farms, some more mountains and some more ocean views to Zarautz. 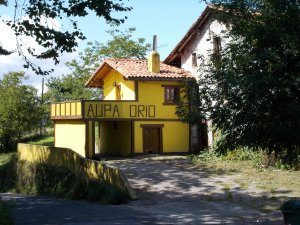 I came across a lot of pilgrims today. A lot. I am a bit worried that the Camino del Norte will become as much of a tourist attraction as the Camino Frances. Part of my personal pilgrimage is alone time, solitude, listening to God and listening to nature, finding myself, finding my faith. While in the albergues, when I start staying in them, I’ll be more open to meeting people. However, during the actual walking part of the Camino, I’m going to prefer to do it alone. So for the screaming kids just doing a short family hike…not what I was looking for. For the other pilgrims on their own journeys for their own reasons, I will say “hola, buen camino” with a smile as I either pass them or take a break and let them pass ahead. We’re all on our own journeys doing this, which is what I began to realise more and more with each passing kilometre. I met a middle-aged Basque couple just out for a hike asking me if I was going to Santiago. Very friendly. But for the most part, I haven’t received a whole lot of “buen caminos” in return.

Another thing about today was there was a LOT of asphalt taking me through this beautiful landscape and not a lot of dirt paths and natural paths. I guess it was about half and half perhaps. 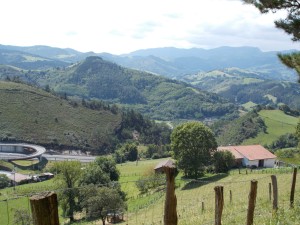 I had a great lunch in Orio, which I had already been to last winter with my ex. It’s a typical Basque coastal village with an amazingly beautiful river and a cool church. During lunch, I decided to go ahead and complete the day by going on to Zarautz. It was only about another hour through a farm and more beautiful mountains. Zarautz, which I also had been to before in my Basque Country visit of 2012 before I lived here, has one of the longest uninterrupted beaches in the peninsula. I’m going to have to come back here and stay the night with my next etapa. The woman at the tourism desk on the beach complimented me on my Spanish, which made me feel good, and she was impressed with the little Euskera I knew. (I always say “eskerrik asko. They love it.) (The photo that follows is leaving Orio, not Zarautz, which I will include in Day 3.)

Day Two seemed easier than the first day, and I don’t seem as tired as I did Sunday. I feel stronger, I feel rejuvenated, and I am more than ready for Day three, which will probably be next weekend, depending on weather. I love being able to train for the Camino by actually walking etapas  of the Camino!