After experiencing Fallas in 2011, one would think I have had enough of Spanish Festivals for a lifetime…not so much. It is true that I am one of those introverts who just doesn’t like being around masses of people. I’m just not a festival or life-of-the-party type. I prefer sitting back and observing. However, I also tend to feel guilty about “missing out” on something. I still have yet to see San Fermines (maybe next year). But there are many other festivals to see, especially in the Basque Country region.

Last year, when I moved to Bilbao, I took advantage of living close and went to Basque capital, Vitoria, on the 4th of August to see the beginning of the Festivales de la Virgen Blanca. I am NOT a fan whatsoever of the Basque “chupinazo” which involves getting everyone extremely wet with wine. This was strike one against it. Strike two was just too many people crowded into the Plaza de la Virgen Blanca. However, it was really cool to see the descent of the “Celedón” to start the festivities. If only I didn’t have to be drowned in wine to see it.

As the Basques like their festivals, they have it planned to have three weeks straight of festivals between the three biggest cities. I missed the festivals of Donostia, but living in Bilbao meant I had to survive Aste Nagusia.

Marijaia is the symbol of Aste Naguisa, a cariacture of a Basque woman ready to party. She is seen everywhere on the posters advertising the event, and when she arrives on the third Saturday of August, the parties begin.

Aste Nagusia began in 1978 and is becoming one of the biggest festivals in Spain. From extremely weird street theatre performances outside the Teatro Arriaga to walking giants to nightly firework displays, Aste Nagusia has something for everyone…except peace and quiet. They also have street discos, Basque dances and concerts. For nine days, Bilbao is filled with people. And then on the fourth Sunday, Marijaia takes a nice sail on a raft down the Nervión Ría to meet a fiery death. The party is over until next year. 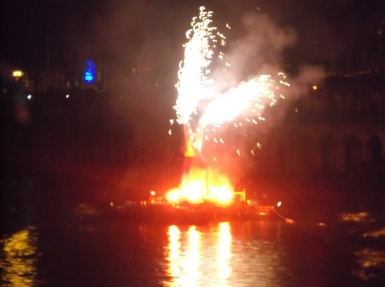 Each village has their own festival too. The most infamous in the Basque Country would have to be in Lekeitio, where for San Antonlines, people compete by seeing who can hang onto a dead goose the longest. The goose used to be alive for this event.  I’m not sure whether I’ll make it to this one. We’ll see.

I have been to a couple of other festivals in Spain. In October 2012 I went to Zaragoza for the Pilares, which honour the patron saint of Zaragoza, Pilar. Like the Fallas, they have an offering of flowers which takes place on October 12. All day long, people dress in the traditional costumes of Aragón to offer Pilar flowers. The next day, they offer fruit. There are tons of concerts, fireworks and other fesitivities too. As all of Spain has the day off for Día de la Hispanidad, this one is quite popular and busy. However, it’s not quite as famous on the international level. 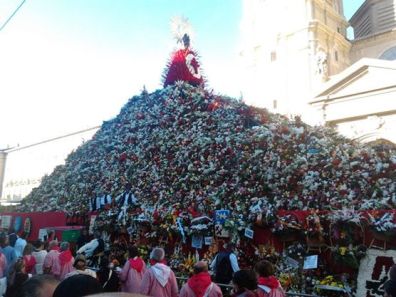 Another festival catching on more and more every year is, of course, gay Pride or Orgullo. I have been twice. Again, as I try to avoid huge conglomerations of people, it’s not really my think. In Madrid, there are so many people that you can’t move. All the bars in Chueca are jam packed with concerts in the street (sometimes. Sometimes, like when I was there in 2011, there are noise ordinances that prohibit sound from being made so everyone had to listen on headphones. I am not making this up.) and drunken tourists everywhere. Pride in Valencia was much calmer and more fun. I remember the drag queen apologizing for not speaking “valenciano”.

So while I am not a party person, I have to admit sometimes festivals can be a good change of pace. The atmosophere changes tremendously with the festivals, and people are happier. The crisis is long forgotten. And I’m sure someone could find a festival in Spain for every day of the year.

However, that person will not be me.