I am finishing my series on Spain’s western neighbour, Portugal, with a look at its capital. In the future, I hope to return to this great country so I can write more about it and discover more about it. But for now, I just have to live with my memories and pictures and anticipation of another visit.

Both of my visits to Lisbon (Lisboa in Portuguese) began with early morning arrivals, in which I had to find breakfast, which you know could be the most important thing (that or family). I have now managed to reference Arrested Development in all three Portugal entries.

My first visit took me to Lisbon’s Aeroporto da Portela, a short metro or bus ride from the city centre. The second time was by an overnight train from Madrid, which dropped me right at Santa Apólonia, one of Lisbon’s four major train stations and a short distance from the city centre. One of the best things about Lisbon is the transportation. Metro, buses, taxis and a cable car can get you where you need to go, although I do prefer walking myself. You get to know the city better on foot than by any other means of transport. However, to see some of the coolest places, some public transport will be needed. 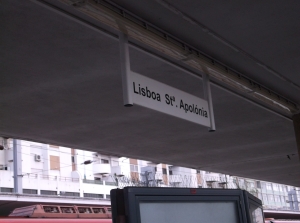 Lisbon reminds me of San Francisco for three reasons. 1. They have hills (seven to be exact). 2. They have cable cars. 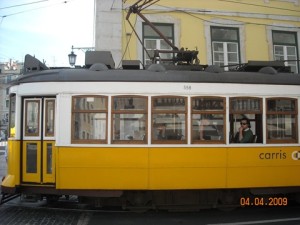 3. They have a bridge (Pont 25 de Abril that crosses the Rio Tejo/Tajo/Tagus)) that could pass for the Golden Gate should the Golden Gate get drunk at Pride and be unable to to show up the next morning. The first time I saw a picture of it, I thought it was the Golden Gate. However, the Golden Gate does not lead to a giant statue of Jesus, Cristo Rei. (In this photo, however, it appears more like the Oakland Bay Bridge. In person, it’s the twin of the Golden Gate, I swear.) 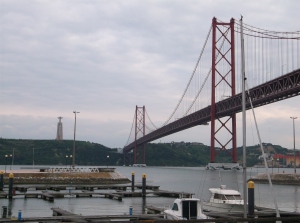 One of the most famous Lisbon sites is the Torre of Belem, an UNESCO Heritage Site and former defense tower. It’s a 5€ entry with narrow stairs, but well worth the entrance fee. This is one of the places you’ll want to catch the cable car to, as the Belem neighbourhood isn’t too close to the centre. The neighbourhood itself is one of my faves as it’s right on the water and is a bit rough around the edges. 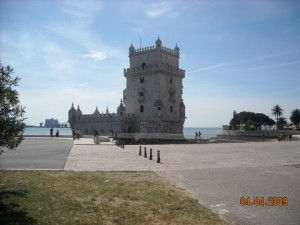 My favourite neighbourhood, however, is the Bairro Alto (High) and it’s neighbour, Bairro Baixa (Low). You can walk or take an elevator between the two. The Bairro Alto has the maze of streets that I love about European Cities (and the nightlife), and the Bairro Baixa has the tourist attractions (including the aforementioned elevator, which also has an observation deck to look over the city).  The famous Praça do Comercio and Praça Rossio are located in the Bairro Baixa. The latter is a place where locals like to meet and both offer splendid people-watching opportunities.

A short walk from the Barrio Baixa is the Castelo de São Jorge, or Castle of St. George. This castle is well worth the entrance fee and also well worth walking around the area surrounding it before and after. It attracts a lot of tourists, but for a good reason. A short walk higher offers a view of the entire city. The castle itself is a relic from the medieval times and comes with a 7€ entrance fee. The prices are going up in Portugal, unfortunately. A little bit of research shows that it’s two euros more than when I visited in 2009. 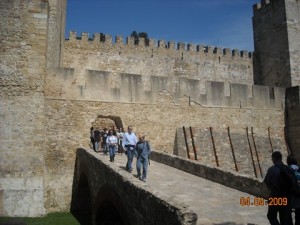 Another bridge, this one with its own identity, is the Vasco de Gama Bridge, which is the longest bridge in Europe at 17.2 kilometres (10.7 miles).  It opened in 1998 and is pretty impressive itself. 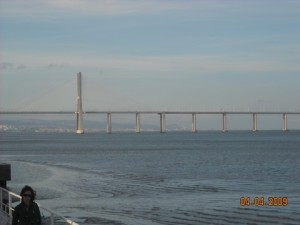 Whenever I travel to big cities, I always try to have time for a day trip to a nearby village. I’ve managed to do this both of my trips to Lisbon. In 2009, I went to the fabled city of Sintra, an easy train trip from Lisbon Centre. It’s like the stuff Walt Disney could only dream of. 28 kilometres from Lisbon, this Unesco World Heritage Site is home of several palaces and castles. Walking around this quaint town, I felt as if I were walking through Disneyland, but located in Segovia, Spain. The only things missing was Mickey Mouse and a Roman aqueduct. 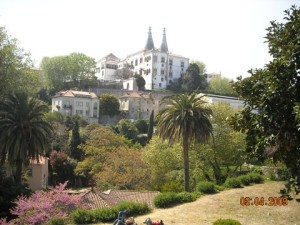 My second visit to Lisbon, I went to another village, Cascais, located on the bay of the same name. Once a residence of the Portuguese royals, this village offers a variety of sporting activities, musuems and spectacular views of the bay. It’s definitely worth the 40 minute train ride from the centre. 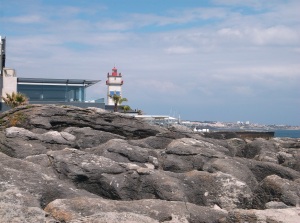 “Decadante” is the word the Spanish use most often to describe their neighbour. Decadante and decaying. And while there is a bit of that edge around, it should not be a deterrant to visit the country. The Spanish say it with a smile, meaning well. Lisbon gives a sense of the old life but also a sense of modern day Portugese life (yes, there are Starbucks).

Overall, Portugal is one of my favourite places to visit. I can’t wait until visit number three.