Over the past five years, I have done a lot of travelling throughout the Iberian Peninsula and a little throughout Europe. Granted, my “little” is some people’s “a lot”, but whatever. The world is a big place and we’re only here for a short amount of time. The point of the lead is…sometimes I like to see things outside The World’s Best Peninsula. And last December, I took advantage of “el Puente de Diciembre/de la Constitución”, a nice 4 or 5 day weekend that Spain has due to two holidays (the signing of the current constitution on the 6th and a Catholic holiday the 8th. Spain will glady remember their ties to the Catholic Church when it gives them a day off work.) and my proximity to France to go to a city known for its wine, the closest major French city to the Spanish border…Bordeaux.

I caught the train in Hendaye, on the border with Spain, and it was a nice three hour train ride through the French Basque Country to the capital of the Aquataine. Although Bordeaux isn’t part of the French Basque Country, you can find Basque restaurants and even a Basque gift shop in the streets of Bordeaux. After deboarding the train, I immediately went to the tourist office, where I tried one of my four sentences I know in French, Parlez-vous espagnole? (For the record, the others are “Parlez-vous anglais?”, “Je non suis pas francias” and, of course, as Moulin Rouge is my all time favourite film…voulez-vous coucher avec moi, ce soir?. Again, on the record, I did not have opportunity to use that last one.) They preferred to practice their Spanish than their English, which was just fine with me.

Bordeaux came across to me as a cross between Valencia, Milano and New Orleans. I felt as if I were walking on the set of Les Miserables, minus the horrible singing of Russell Crowe. The Place de la Bourse was massive and elegant. I just wanted to break into “Look Down” and start a French revolution when I saw it. 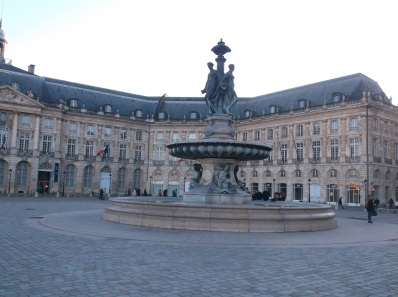 The sheer width of the Garrone River reminded me of New Orleans for some reason, and my evening walks along the river this weekend were a highlight. As Christmas was approaching, there was a nice Christmas market, and on Saturday afternoon, the Rue Sainte-Catherine (the longest pedestrian street in France) was full of busy shoppers checking out the shops. I was excited at seeing many of the same shops we have in Spain (Zara, H&M, FNAC). It’s always more fun to go to these stores in another place than it is the town you live in. 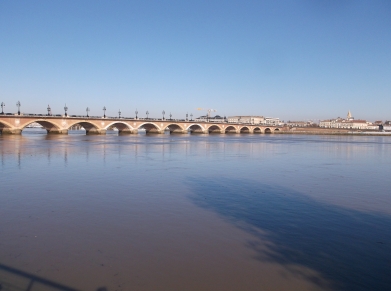 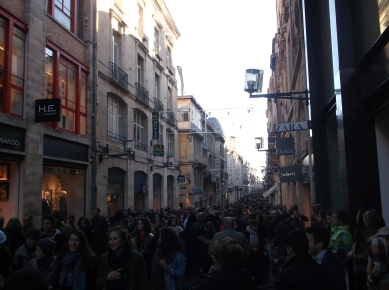 Bordeaux is also home to the largest plaza (square) in Europe, the Esplande des Quinconces. As for the French food, the croissants are divine, the café au laits are good but too expensive (considering a café con leche across the Pyreness will only cost 1,30€ most places…) I sampled Bordeaux at an Italian restaurant, and it is a great wine. But it’s not as great as Spain’s La Rioja or the Basque Country’s Txakoli. I am quite bias toward Spain about everything though, so don’t pay any attention to me here.

Other points of interest included the Cathedral, which was undergoing renovations, and the Grand Théatre. One thing that stood out to me was a church that had been reconverted into a cinema. It played independent and foreign films in the original language. This was a gift to me, as I don’t like dubbing but love indie and foreign cinema. I regret not taking in a film here. However, I was too tired to stay awake. This meant I didn’t get to sample the gay nightlife, but I’m sure it would be very French, whatever that means. 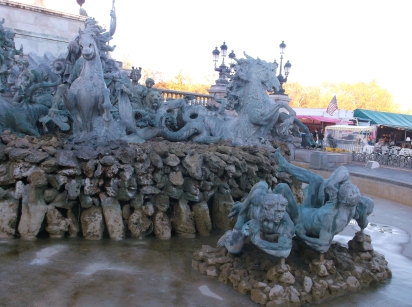 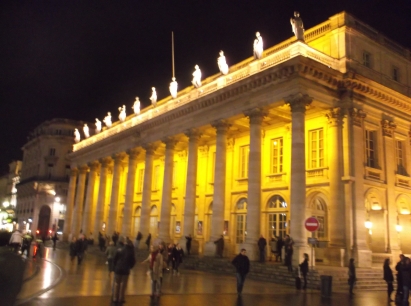 I stayed with an acquaintance from CouchSurfing, which made the experience a bit more unique for me. I usually like the idea of Couchsurfing, but in the end I prefer to pay a bit of money to be able to come and go as I went. However, by Couchsurfing, I got the opportunity to see a bit more of the French culture and life. I was able to attend a lunch with the host and sample some amazing home cooked French cusine and more Bourdeaux, although the French were quite fond of the La Rioja I had brought from Spain. The French, at least in Bordeaux, are friendlier than advertised. What little French I did know was appreciated, and the fact I did know other languages but “just haven’t had the opportunity to learn French” (a lie!) went far. Like I said, the fact I offered up Spanish OR English went a long way, and the proximity to Spain meant a lot of opportunity to use my Spanish. I would love to tell the French teacher from my high school that I spoke Spanish in France! 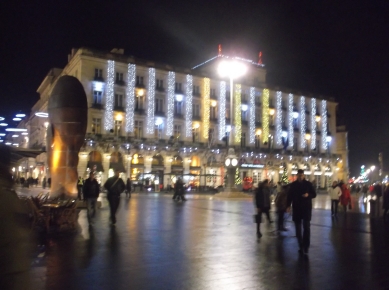 All in all, I preferred Bordeaux to it’s rival capital city, Paris. It really is the Pearl of the Aquataine (although I know I will love Bayonne when I get to go). Paris has a lot of things to see, but it left me with a bad taste in my mouth. Bordeaux left me with a much better taste, and I’m not referring to the wine.

DISCLAIMER. I AM NOT ADVOCATING THE USE OF SPANISH OR ENGLISH IN FRANCE. Never assume anyone speaks your language. Bordeaux’s proximity to Spain meant many Spanish tourists so more people knew Spanish. Always try to learn a little bit of the local language, even if it’s just “I don’t speak the language”. I 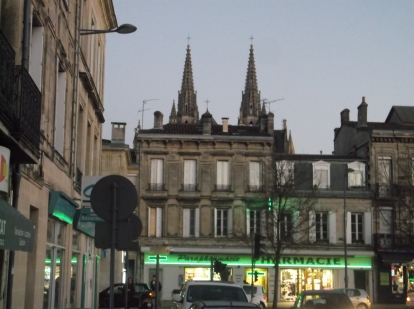