Pamplona is famous for the annual San Fermines (Running of the Bulls) festival each July, but the city of nearly 200,000 people has more to offer than drunken tourists attempting to outrace bulls who are running themselves to their own deaths. I have nothing against bullfighting, for the record, as I understand it is part of Spain’s history. However, I also don’t support it. Neither do most of the Spanish, but that’s neither here nor there.

The capital of Navarra, Pamplona (or Iruñea in standard Euskera), like almost all Spanish cities, has a charming old quarter. The Plaza del Castillo offers Café Iruña, an old café where Hemingway himself is said to have written during his stays in Pamplona. If you’re not having your coffee or meal on the terrace, it’s actually reasonably priced for being in the main square and for having such historical ties. 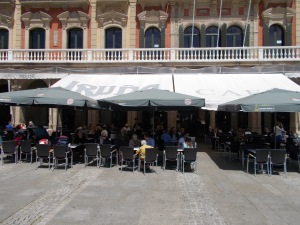 The café is located quite close to the “encierro”, the route the bulls take during those 8 a.m. summer runs. Even closer to the encierro is the Arga River, which provided a nice walk through nature.

Another fave for citizens and tourists alike is the Parque Taconera, a park featuring animals. I loved seeing the deer, but children like the chickens and the “pavos reales”, or peacocks.

For me, the best of Navarra and visiting Pamplona has been the villages close by. Navarra is the gateway to the Pyranees, an area I am dying to explore more. On my first visit in 2010, I visited the Camino de Santiago village Puente de la Reina, which has a beautiful medieval bridge and is charming in its own right. I also visited Olite, home of a spectacular castle on this trip. Olite might quite possibly be the most boring village in all of Spain. It was hard even finding a place to have dinner on this trip. Granted, it was December and a very cold night. I just remember the castle being beautiful and not much else.

About 40 kilometres from Pamplona, Estella is built in the hills. They have a stunning basilicia on top of one hill, and a cross if you want to hike even higher. There are a few other Medieval churches and a very small castle ruins. 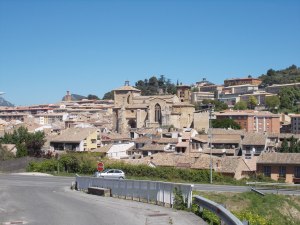 I regret not having more time in Estella and spending more time in Pamplona. The people seemed a bit subdued, especially compared with the lively Bilbao where I live. There were quite a few nice cafés, including the Katakrak Liburak, which came attached with a bookshop. However, Pamplona just seemed quiet. Estella, despite being a quarter of the size, was livelier for me. I can only imagine how crowded San Fermines must be though.

In any case, Navarra, Navarre, Naforroa, or whatever language you want to use to call it, is worth visiting outside the festivals. 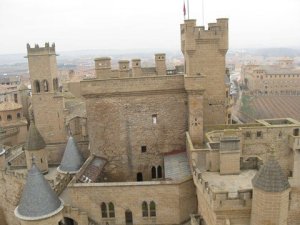 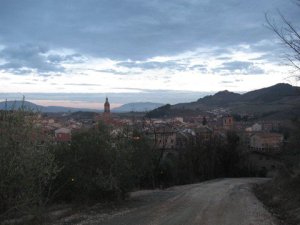 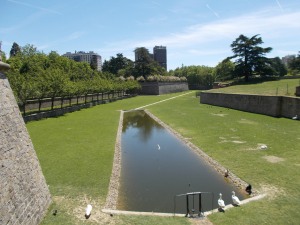